How to Outline a Thriller Novel 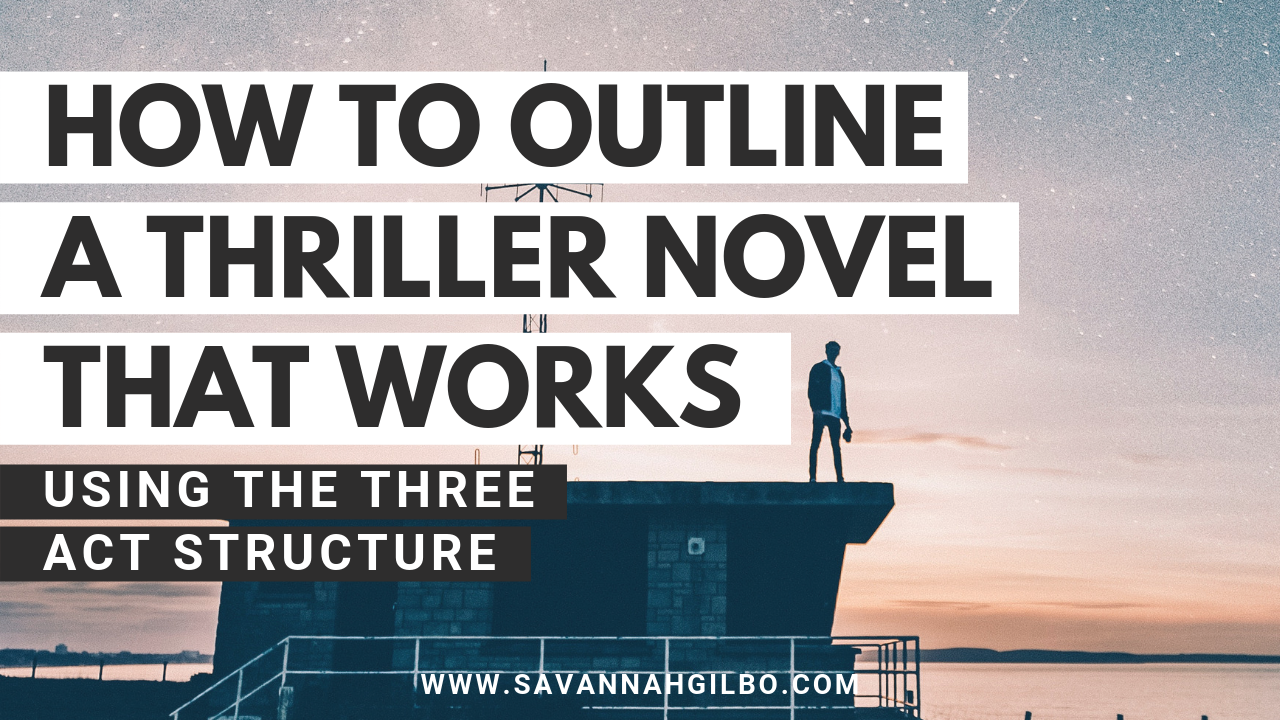 Regardless of whether you fall in the “plotter” or “pantser” camp, having a solid understanding of story structure will help you write a story that works and satisfies fans of the genre.

In today’s post, I’m going to show you how to write a well-structured thriller novel using the Three Act Structure. But before we get into the details, let’s talk about word count for a quick moment.

The first thing you’ll want to do when planning any novel is to decide on a target word count. The average length of a thriller novel is 80,000 words, so I’ll be using that for my example. Once you have a target word count for your story, you can then divide your novel into sections using the Three Act Structure.

The Three Act Structure is a plot structure template that splits a story into three parts. Typically, the sections break out like this:

Now let’s take a look at the purpose of each act, as well as the key story moments that need to happen within certain sections of each act.

The purpose of Act 1 is to introduce your protagonist, his or her external goals, and the main conflict that’s keeping him or her from reaching their goals. By the end of this section, your reader should be wondering, “will the protagonist stop the antagonist before he or she commits any more crimes/hurt more people?” Act 1 includes these key story moments:

The Hook is your first opportunity to grab your reader’s attention and draw them into your story. In a thriller, this is where you’ll want to introduce a unique or compelling character that readers want to learn more about at a critical moment in his or her life. This is a great place to give readers a glimpse at the main conflict of the story.

The Inciting Incident in a thriller is ALWAYS the discovery of a crime that indicates there’s a master antagonist on the loose. For example, if you were writing a serial killer thriller, the Inciting Incident would be when a body (or bodies) is found that points to a serial killer. The discovery of this crime gives rise to your character’s object of desire, which is usually to find and/or stop the antagonist before he or she can commit any further crimes (and to not die in the process).

The First Plot Point is the moment where your protagonist will be personally affected by the conflict that is the basis for your thriller. Using the serial killer thriller example, this could be something super personal like the abduction of someone in the protagonist’s family. Or it could be something a little less personal like the protagonist’s boss telling him or her that their job depends on identifying and arresting or stopping the killer. Whatever it is, there’s usually some new development that raises the stakes and clearly defines the character’s goals going forward. This is also where you can introduce an external goal that might be more specific to the sub-genre you’re writing in.

The Midpoint is another new development raises the stakes yet again. It can manifest as a “false-high” or a “false-low.” A “false-high” occurs when it appears that your protagonist is making progress toward achieving their story goal. A “false-low” occurs when it appears that there’s absolutely no way your character will succeed in reaching their story goal. In a thriller, the midpoint usually includes a moment where the protagonist discovers and/or understands what the antagonist wants and why. And it’s this newly realized information that helps the protagonist (and the reader) look at what’s happening in a new light and what helps the protagonist move from a reactive to a proactive state. For example, in a serial killer thriller, this could be when the protagonist realizes what’s motivating the killer to target a specific kind of person and/or why they kill in the first place.

The Second Pinch Point gives the protagonist (and the reader) another glimpse at who they’re up against. If your story has an internal arc, this moment might also highlight the character’s inner conflict—or what they need to overcome internally (a fear or false belief) in order to succeed in stopping the antagonist.

The Second Plot Point is another new development that raises the stakes (again) to their all-time highest point. This is where the absolute worst thing that can happen to your protagonist happens, and it looks like he or she will never succeed in achieving their story goal. The protagonist has learned everything he or she needs to become the primary catalyst in the story’s conclusion, but might still be battling inner doubts, fears, or false beliefs. Whatever happens, the protagonist is now on a direct path to a confrontation with the antagonist.

The purpose of Act 3 is to bring your protagonist into a final showdown with the antagonist. In other words, this section provides the answer to the question raised in Act 1. The key story moments of Act 3 are:

At the Crisis moment, your protagonist will have to choose between succumbing to their fears and letting the antagonist win or finding the strength and courage to meet the antagonist in a final showdown. Usually, this is where the protagonist realizes what he or she must do to fix not only the external story problems but more importantly, their internal problems as well. It’s the moment where he or she figures out the solution to their big problem and learns the theme or life lesson of the story.

So, there you have it—the “broad strokes” of a thriller novel. There’s much more to it, but this should give you a pretty good framework to build your story around!

See also: How to Plot Your Novel with the Save the Cat! Beat Sheet, The 6 Scenes Every Thriller Novel Must Have, The Conventions of the Thriller Genre

Want to work with me on your thriller novel? If you need help getting started or getting to “The End,” click here to check out my 1:1 book coaching service. If you have a finished draft and want to know what’s working, what’s not working (and why), plus how to make it better, click here to get your manuscript evaluated. 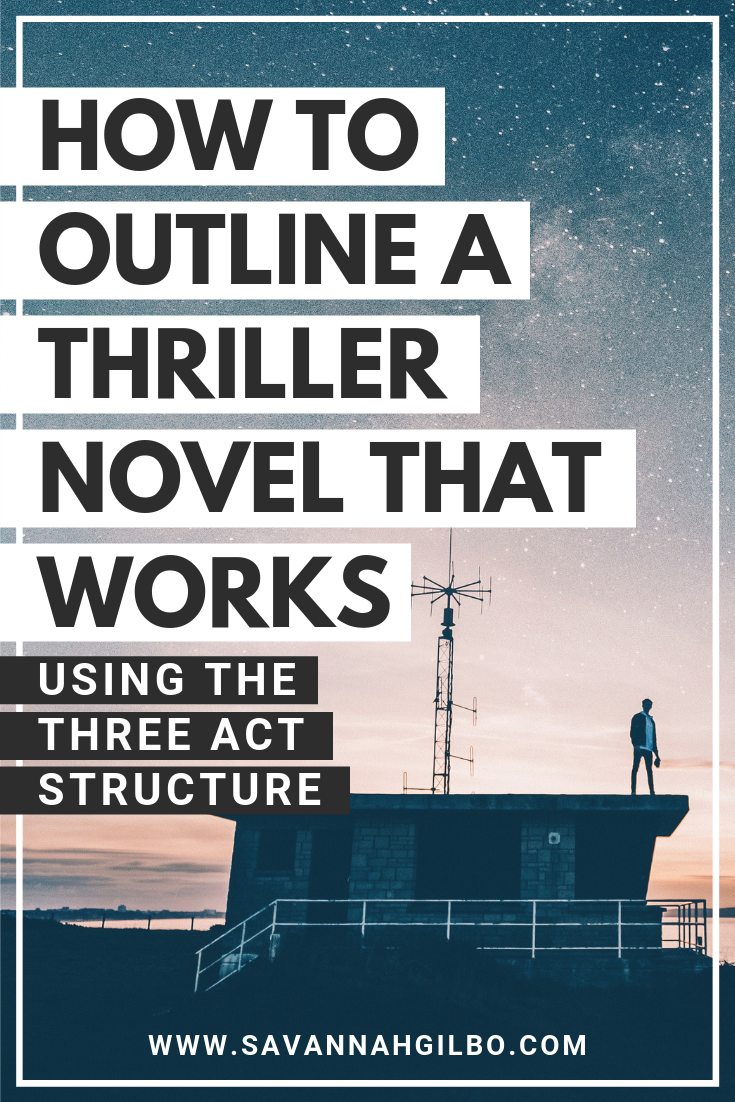 👉 Let's discuss in the comments: Are you writing a thriller? Do you plan or outline your story before you write? What plot structure templates do you use? Let us know in the comments below!