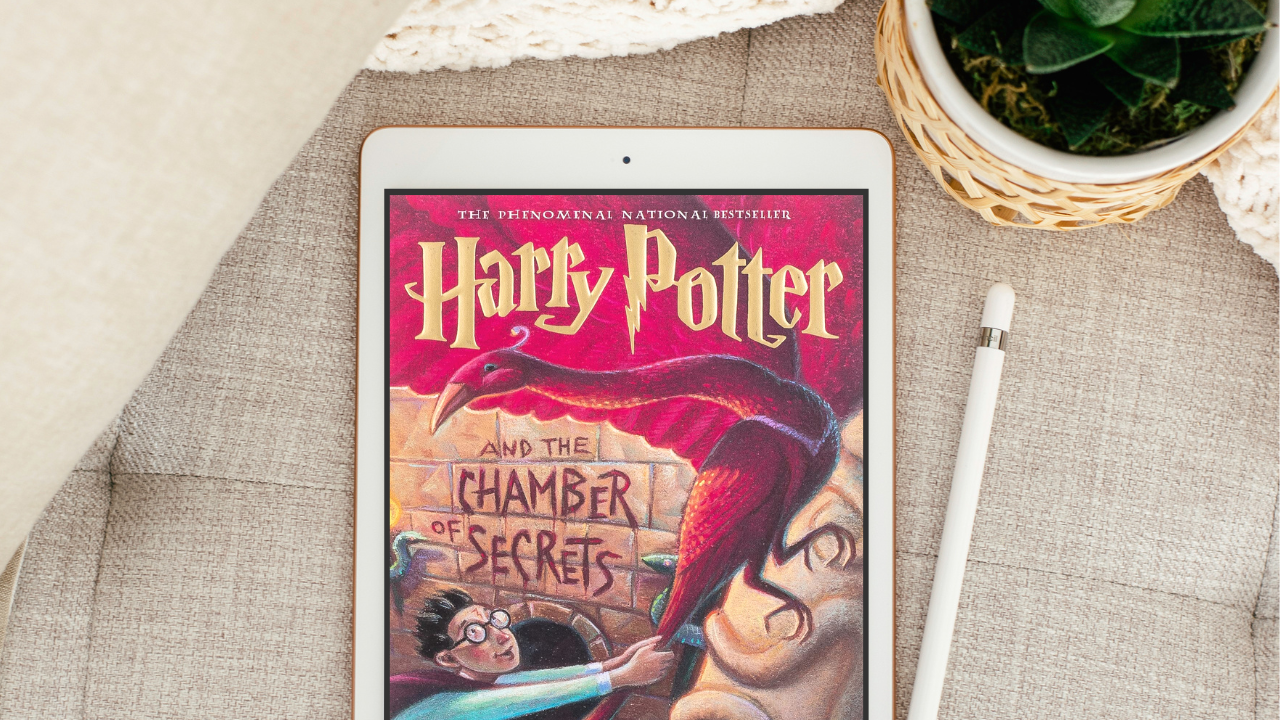 So, in today’s post, we’re going to look at the first chapter of Harry Potter and the Chamber of Secrets by J.K. Rowling. And we’ll look at the chapter in two different ways:

Want to see our analysis of Harry Potter and the Sorcerer’s Stone? Click here to check out the same breakdown for the first book in the Harry Potter series!

This opening chapter includes part of one scene (more on this below). Here’s a summary of the first chapter:

Harry Potter has the worst twelfth birthday. His owl, Hedwig, is miserable, and his friends seem to have forgotten that he exists. Vernon Dursley announces that they’re hosting a dinner party later that evening, and that this could be the day he makes the biggest deal of his career–if everything goes well, of course. Before dinner, Harry sees a pair of eyes watching him from the hedge in the garden, but Dudley interrupts before he can investigate. Dudley picks on Harry, and Harry retaliates with pretend-magic. That evening, the Mason’s arrive, and Vernon warns Harry to stay in his room and be quiet until the Masons leave. Harry goes to his room, and finds someone sitting on his bed.

Let’s take a look at how J.K. Rowling did this in this very first chapter of Harry Potter and the Chamber of Secrets. And to do this, we’re going to use seven questions from Paula Munier’s book, The Writer’s Guide to Beginnings.

1.GENRE: What kind of story is it?

Harry Potter and the Chamber of Secrets is a middle-grade fantasy novel. Because of that, I’m on the lookout for three things–1) elements of fantasy or wonder, 2) humor, and 3) a middle-grade aged protagonist. We have all three of these ingredients in this opening chapter. We learn that Harry is 12 years old, and that he’s a wizard who is looking forward to going back to Hogwarts School for Witchcraft and Wizardry.

Beyond that, there’s plenty of humor–Vernon is compared to a winded rhinoceros, the Dursleys playact the Mason’s arrival, and Harry performs fake-magic on Dudley. So, from a reader’s perspective, there’s no doubt that this will be a fantasy story (if that wasn’t already clear from the back cover copy!).

For this question, I like to look at the content genre of the story. So, what is the story really going to be about? And Harry Potter and the Chamber of Secrets is a combination of the action (external) and worldview (internal) content genres.

In the first chapter, Rowling reminds us that Harry survived another confrontation with Lord Voldemort–this time over the Sorcerer’s Stone. We know that Voldemort is still out there, so again, we have the perfect setup for an action/worldview story–a) there will still be life or death stakes in this story, b) the final confrontation will still occur between Harry and Voldemort, and c) Harry will still have to come to terms with being “The Boy Who Lived.” Only this time, the story is going to involve something called the Chamber of Secrets (we know this from the title).

Unlike the first Harry Potter book, we dive right into Harry’s perspective in this opening chapter. Again, Rowling gives us the feeling of zooming into the Dursleys house from an omniscient perspective, and drops us right into the scene with Harry. The rest of the story will follow Harry Potter from a limited third person perspective.

Harry Potter! We’re in his perspective, but Rowling also does a great job of creating empathy for him. He’s having the worst birthday, and he hasn’t heard from his friends all summer. His poor owl, Hedwig, is miserable, and now they both have to stay cooped up in Harry’s room while the Dursleys entertain the Masons. Not only that, but there was a creepy pair of eyes staring at Harry from the bushes.

As readers, we’re wondering things like… Will Voldemort show up and try to kill Harry again? What’s going to happen to Harry when he goes back to Hogwarts? Who did those eyes belong to in the bushes? And things like that… Which is exactly what Rowling answers for us throughout the rest of the story!

This chapter takes place in Little Whinging, Surrey. However, we’re also reminded of the idea that there are two separate worlds–a muggle world and a wizarding world–and we know Harry is going back to Hogwarts very soon.

There are three main emotions I think we all feel when reading this first chapter–curiosity, concern, and wonder. We’re curious about what will happen to Harry once he goes back to Hogwarts. We’re concerned about whether or not Voldemort will come back, and what will happen if he does. And we feel wonder because there are reminders of the magical world everywhere in this chapter–as readers, we can’t wait to go back to Hogwarts (just like Harry)! If you consider the rest of the book, these are the perfect feelings to evoke in readers from page one.

We care about what happens next because we feel bad for Harry. He just had the best year of his entire life (despite everything that happened with Voldemort and the Sorcerer’s Stone), and now he’s back at the Dursleys where he’s bullied and treated poorly. Not only that, but he hasn’t heard from either of his friends all summer! Based on this set up, we root for Harry and hope he’ll turn out alright. We’re also a tiny bit concerned about those eyes he saw in the bushes out front of the Dursleys, but we don’t quite know what the threat is yet. Because of all that, we keep reading to see how everything will turn out for Harry.

So, as you can see, Rowling definitely gave us a glimpse at the big picture of this story–we know that it’s going to be about a young wizard named Harry Potter, we know it’ll have something to do with the Chamber of Secrets (from the title), and we know that another confrontation with Lord Voldemort is inevitable.

Now, let’s dig into the structure of each scene within this chapter so we can see how and why everything works. To do this, we’re going to use the scene structure I laid out in this article. If you’re a fan of The Story Grid by Shawn Coyne, you will recognize this structure.

A house elf named Dobby warns Harry not to return to Hogwarts because, if he does, he’ll be in mortal danger. Harry tries to get more information out of Dobby, but Dobby cannot speak ill against his master. Dobby gets upset, makes a bunch of noise, and demands that Harry promise not to return to Hogwarts. Harry refuses to promise, and Dobby uses magic to levitate and drop a cake onto Mrs. Mason’s head. The Improper Use of Magic Office sends Harry a letter warning him that one more use of magic outside of Hogwarts will result in his expulsion. Vernon is livid and locks Harry in his bedroom, threatening to keep him away from Hogwarts forever.

In this scene, Harry wants to stay off Vernon’s radar by obeying his rules (in general and) when the Mason’s come to visit. He just wants to stay out of the way so that he doesn’t get into any more trouble. So, let’s look at the conflict that gets in the way of Harry's goal in this scene:

The main thread we’re tracking in this scene is whether or not Harry will stay out of the way during the Mason’s visit. The main conflict surfaces when Harry meets Dobby, and when Dobby is unable to keep quiet. Dobby’s arrival threatens Harry’s immediate sense of security (with the Dursleys), but the news he delivers also hints at a bigger threat to Harry’s safety (and life) should he go back to Hogwarts.

Coming soon: our analysis of Harry Potter and the Prisoner of Azkaban