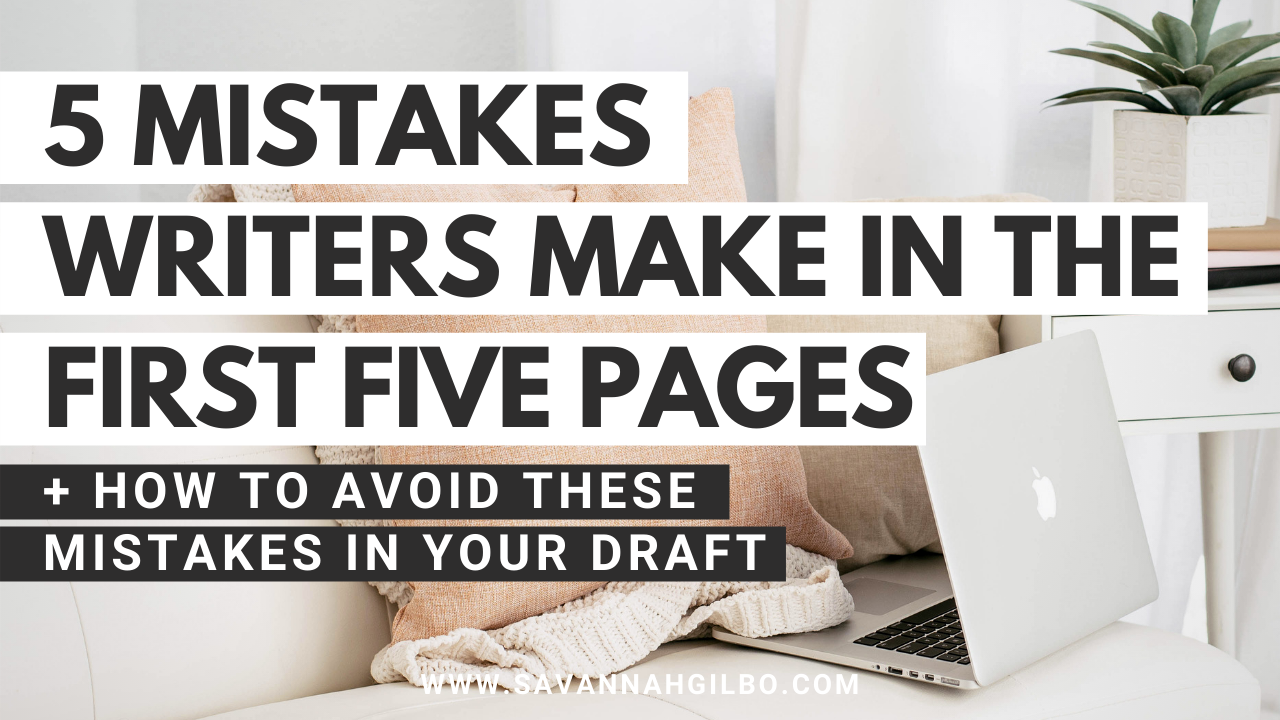 Do you ever get stuck writing and rewriting the first few pages of your story?

If so, you're not alone. I've met a lot of writers who struggle to get past the first three to five pages of their story -- and because of that, they end up feeling like they're not cut out for this whole "write a book" thing, and may even give up on their writing altogether. Can you relate?

In today's post, I'm going to share the five most common mistakes I see writers make in their opening pages. If you're having trouble pushing past those first few pages of your draft, it might be because of one of these crippling mistakes. But don't worry, I'll also share tips for avoiding these mistakes, too.

Why are the first five pages so important?

The first three to five pages of your story are important for two main reasons:

First, we only have a very small window to catch a reader’s attention and make them want to find out how the story’s going to play out and how it’s ultimately going to end. And if we don’t catch their attention in the first five pages, they’re probably not going to keep reading the rest of the story.

Second, agents and publishers usually ask for the first five or ten pages of your manuscript so they can get an overall sense of your story and your writing skills. If your first five pages don’t grab their attention, they know the book isn’t likely to grab the reader's attention either.

So, to help you write the best set of opening pages possible, let's take a look at the top five mistakes to avoid in your first five pages.

Mistake #1: Not giving enough big-picture context to the reader.

The first mistake I see writers make in their first few pages is that they don't give the readers enough context about the big picture of the story.

Sometimes writers think it’s best to hold back important information in order to manipulate the reader or to make them curious about what's going to happen next. But in most cases, this doesn't have the desired effect.

When you purposely leave out important context, readers almost always end up feeling lost and confused.

So, to avoid this mistake, you'll want to give readers all the necessary context so that they'll have some notion of where the story's headed and why certain things are important. If you’re a first time writer, this will probably feel clunky and you’ll worry you’re being too obvious, but it’s not true!

Usually, it’s precisely the information that you want to leave out that would actually pull the reader into the story and make them want to know more -- IF only they had that context on the page. So, long story short, don't hold back!

Mistake #2: Introducing the protagonist too late in the story.

The second mistake I see writers make in their first few pages is that they introduce the protagonist too late -- or they start the story with a character who isn’t the protagonist.

And this is a problem because when readers pick up a book, they’re naturally going to look for someone to latch onto. They want to know whose story this is, why things matter to that person, and why they should care.

This seems to come more naturally to writers who write in the first person because everything is written from the protagonist’s perspective. So, if you’re writing in the third person, try to be extra aware of introducing your protagonist to readers as soon as possible.

The third mistake I see writers make in their first few pages is that there’s a lot of action happening but there’s not really any context as to why things are happening or what things mean.

Sometimes writers start their story with the most dramatic thing possible (like car chases, explosions, shoot outs, etc.) because they think they have to in order for the story to be interesting. But here's the thing...

This kind of action at the beginning of a story (without the big picture context like we talked about earlier) is going to feel objectively dramatic, but will probably be really boring for the reader.

So, to avoid this mistake, you'll want to get your protagonist into some kind of meaningful action right away.

This also means you don’t want to include large passages of backstory or worldbuilding details either.

A lot of writers ask me should I start with a normal day in my character’s life and then go into the main conflict?

And in almost all cases, my answer is no.

You really want to start your story with the introduction of some kind of problem that forces your character to take action. Start with a problem so that readers know there IS a problem -- and then they can track how your character deals with that problem (that grows, escalates, and complicates) until the very end of the story.

Mistake #4: There's too much backstory or too many worldbuilding details.

The fourth mistake I see writers make in their first few pages is that they dump a bunch of backstory or worldbuilding information onto the reader to make sure the reader understands what’s happening.

So, to avoid this mistake, you'll want to weave in bits of backstory or worldbuilding information into the story where it's relevant to what's happening in the present moment.

As your protagonist navigates their world and interacts with people, places, and things, make sure there's something in their present moment that 'triggers' whatever backstory or worldbuilding information you want to share.

Mistake #5: There's nothing at stake.

The fifth mistake I see writers make in their first few pages is that there’s nothing at stake -- or sometimes there is something at stake but it doesn’t really matter to the overall story.

This is one of the main reasons I see writers run out of steam or hit a wall when it comes time to sit down and write.

Not only that, but when there’s nothing at stake for your protagonist -- and when they don’t have to make decisions given what they want and in light of what’s at stake -- your draft will end up feeling like a collection of random things that happen versus a cohesive story that unfolds from start to finish.

So, to avoid making this mistake, you'll want to make sure that it's crystal clear to the reader what your protagonist wants, why they want it, and what’s at stake if he or she doesn’t get it. 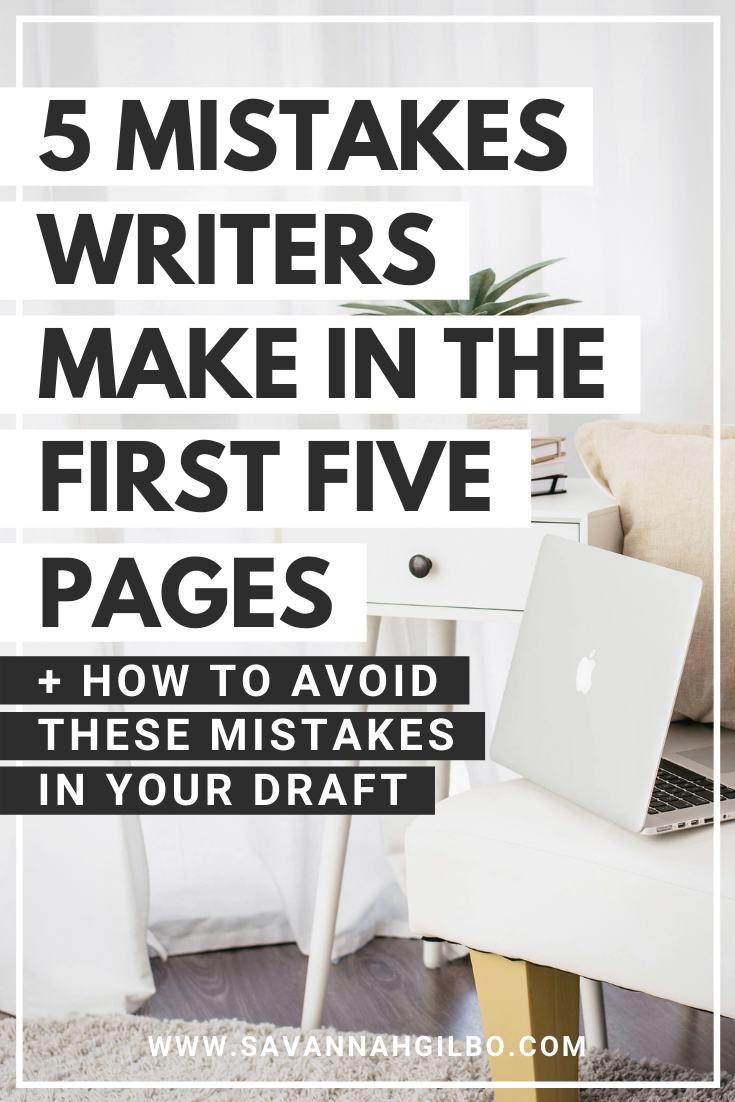 Those are the top five most common mistakes I see writers make in their first three to five pages -- and the good news is that all of them are completely avoidable if you do a little work upfront.

👉 Let me know what you think: Are you guilty of making some of these mistakes in your story? Which one is the hardest for you to avoid?