Save the Cat! Beat Sheet: The Act Three Beats 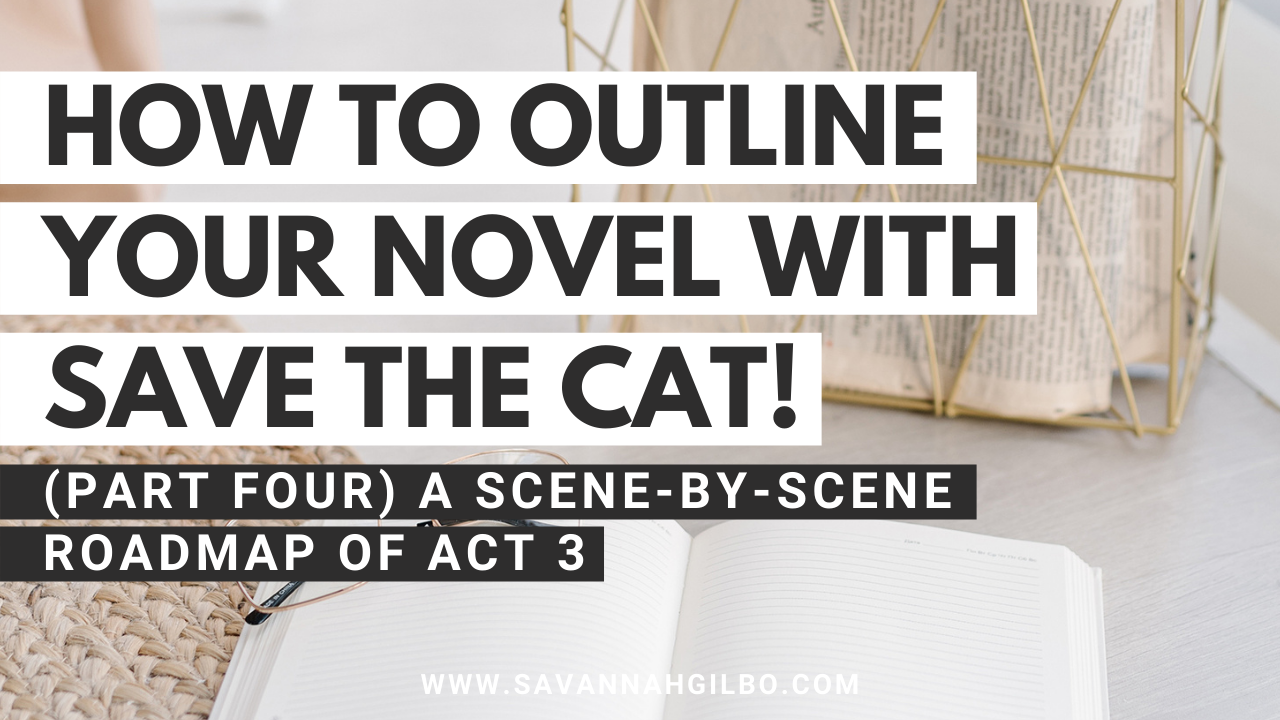 Now, if you aren’t familiar with Blake Snyder’s work, the Save the Cat! Beat Sheet is a popular story structure template that subdivides the beginning, middle, and end of a story into 15 “beats” or plot points. Each of these beats has a specific purpose and serves a particular function within your over-arching, global story.

The great thing about this plotting method (and story structure in general) is that it helps you determine the order in which the events of your plot happen and, maybe even more importantly, the timing of when they should happen. Combine this with a character who needs to change—and does change—and you've got a recipe for writing a story that works.

So, without further ado, let’s take a look at how to plot the final section of your novel with Blake Snyder’s Save the Cat! Beat Sheet. We're also going to look at how these beats show up in two popular young adult novels—The Hunger Games and Everything, Everything.

A Quick Note on Word Count

Now, let’s also say that on average, you write about 1,500-word scenes. That means we can plan for about 14 scenes to make up the final act of your story.

I always recommend writing scenes between 1,000 and 2,000 words with the sweet spot being around 1,500 words. A 1,500-word scene is long enough to convey what’s happening and short enough to hold your reader’s attention and make them want to continue reading. So, we have about 20,000-words to play with here, and we have about 14 scenes within those 20,000-words.

Now, here’s something really important that I didn’t really understand when I first started using the Save the Cat! plotting method. Some of the beats in the Save the Cat! method will be single scene beats while others are going to be multi-scene beats. I’ll explain more about that once we get into each beat, but just keep that in mind for now.

The Save the Cat! Act Three Beats

The finale is a multi-scene beat in which you need to resolve all the problems created throughout the entire story and prove that the protagonist has changed because they learned the theme of the story.

But don't panic! This is where the Save the Cat! method really helps us out with what's called the five-part finale. The five-part finale essentially breaks down the third act into five parts, giving us even more clarity on what needs to happen in this section. Let's check it out.

In this micro-beat, your protagonist is essentially gathering help so that they can execute whatever plan they came up with in the break into three beat.

However, this doesn’t always mean they’re literally rounding up people to help them solve the plot problem. This could also mean gathering tools, making plans, collecting supplies, mapping out the route, etc.

And part of this "gathering the team" could include things like mending fences also. Let’s say your protagonist got in a fight with their parents or their best friend sometime during act two. Now that they’ve learned the lesson of the story, he or she might need to mend fences and apologize in order to move forward into the climactic moment. So, just keep that in mind.

In this micro-beat, now that the tools and or team have been gathered, it’s go time! Your protagonist (and their allies if they have allies) need to execute the plan.

And whatever their plan is, it's usually working during this micro-beat. Even if the plan seemed crazy or impossible, it seems to be working.

And again, this is not just a sacrifice to check a box--the purpose of the sacrifices that occur in this micro-beat is to get your protagonist to face the climactic moment alone.

Why? Because we want to show readers that the protagonist really does have what it takes to succeed! They've learned the lesson and now they're seeing some success.

So, let’s go back to our case studies to see this micro-beat in action:

And although this might sound specific to an action story or one of the more external genres, but it can apply to any of them--you just have to think a little more metaphorically about leading the protagonist into a trap.

The purpose of this micro-beat is to show that the protagonist might have been a little naive and overconfident in their plans.

So, it’s another bit of conflict that provides one last opportunity for the protagonist to prove their worth, or to prove they’re really a new and improved person.

This micro-beat is kind of like a mini-debate. It’s the reaction to the high tower surprise. And really, this is the moment that readers have been waiting for the whole time.

The protagonist has seemingly come up on an impossible obstacle and has nothing left. No hope, no plan, no back up, maybe even no tools or weapons.

But they still have something.

They have whatever they learned throughout the story. They’re a different person now. A person whose overcome that flaw from act one.

So, now it’s time to really prove it. It’s time for them to take a leap of faith.

Let's take a look at our case studies:

Part 5: Execution of the New Plan

This is a micro-beat in which the protagonist actually takes that leap of faith. So, they put their new, bold plan into action--and it works!

So, you’ve put your protagonist through the ringer, forced them to grow and change, and now they get the ending they deserve after all that hard work.

And in the event that your protagonist fails at the end?

That’s fine, too. Just make sure that there’s a point to their failure. That there’s a lesson to be learned from that, too. I think we can all agree it’s better to try and fail than to never try anything at all, right?

Let's check out our case studies:

And that’s the five-part finale! It’s one of my favorite parts of the Save the Cat! method because it helps you pull your entire story into focus and really highlight that theme or lesson that you’re trying to express.

It’s also what helps us writers make an impact on readers and leave them with something to think about or remember.

I’m sure if you think about your favorite story, you can remember the exact feeling I’m talking about. It’s why we go back to our favorite stories over and over again--to relive that cathartic experience that the five-part finale provides. So, don't skimp on this part of your story!

The final image beat is a single scene beat in which you show readers an “after” snapshot of your protagonist’s life and how much he or she has changed.

In our plan of fourteen scenes for act three, this is the final scene. Scene number fourteen.

And, essentially, this is the opposite of the opening image that you delivered in act one. So, what’s your protagonist’s life like now that they’ve survived the events of the story? How far have they come? What has changed? What have they learned? How have they grown?

In this one final scene, it should be very obvious to readers how the story has changed your protagonist. The farther apart your opening image and your final image are, the more you’ve proved that there was a point to your story, and that the story you’ve written works.

Let's take a look at our two case studies:

And that wraps up the fifteen beats of the Save the Cat! plotting method! I hope you can see how and why it helps you create a solid arc of change, and therefore a solid story.

If this structure resonates with you, there are a few fantastic books you can check out that go into way more detail than I can go here.

And if this plotting method doesn’t resonate with you—that’s okay too! There’s no “right” way to plot out a novel. What's important is finding a method that works for you so that you can finish your draft and get your story out and into the world.