Save the Cat! Beat Sheet: The Act Two Beats (Part 1) 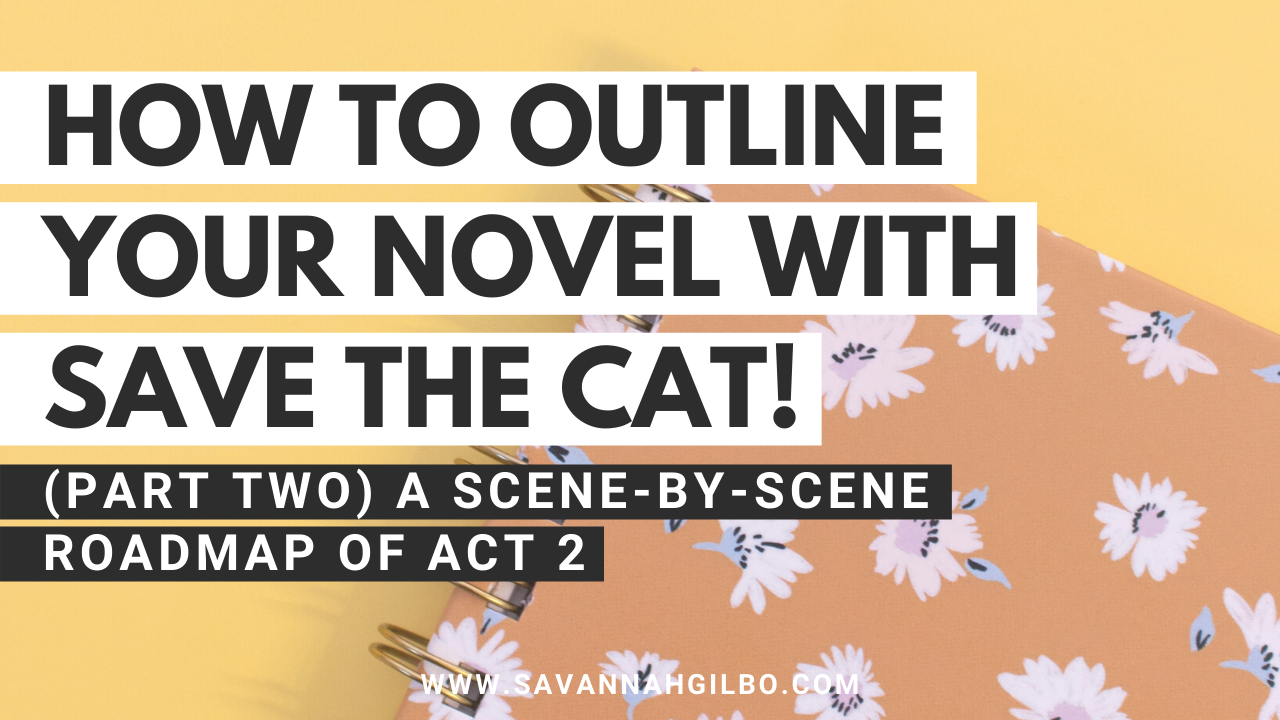 In today’s post, I’m going to show you how to use Blake Snyder’s Save the Cat! Beat Sheet to plot the first half of the middle section of your novel.

If you aren’t familiar with Blake Snyder’s work, the Save the Cat! Beat Sheet is a popular story structure template that subdivides the beginning, middle, and end of a story into 15 “beats” or plot points. Each of these beats has a specific purpose and serves a particular function within your over-arching, global story.

The great thing about this plotting method (and story structure in general) is that it helps you determine the order in which the events of your plot happen and, maybe even more importantly, the timing of when they should happen. Combine this with a character who needs to change—and does change—and you've got a recipe for writing a story that works.

If you need help plotting out the beginning beats of your story, check out this blog post and podcast episode.

Now, without further ado, let’s take a look at how to plot the first half of the middle section of your novel with Blake Snyder’s Save the Cat! Beat Sheet. We're also going to look at how these beats show up in two popular young adult novels—The Hunger Games and Everything, Everything.

A Quick Note on Word Count

Now, let’s also say that on average, you write about 1,500-word scenes. That means we can plan for about 14 scenes to make up the first half of this middle section.

I always recommend writing scenes between 1,000 and 2,000 words with the sweet spot being around 1,500 words. A 1,500-word scene is long enough to convey what’s happening and short enough to hold your reader’s attention and make them want to continue reading. So, we have about 20,000-words to play with here, and we have about 14 scenes within those 20,000-words.

Now, here’s something really important that I didn’t really understand when I first started using the Save the Cat! plotting method. Some of the beats in the Save the Cat! method will be single scene beats while others are going to be multi-scene beats. I’ll explain more about that once we get into each beat, but just keep that in mind for now.

The Save the Cat! Act Two Beats (Part 1)

The B-Story beat is the very first beat in act two following the break into two beat. Of our fourteen scenes that make up the first half of act two, this will be scene number one, or scene number fifteen overall.

This is a single scene beat that introduces a new character (or characters depending on your story) who will ultimately help the hero learn the lesson of the story.

So, how do you come up with the "right" B-Story character for your story?

The main function of the B-Story is to help the protagonist learn the lesson of the story. Typical manifestations of the B-Story character are a nemesis, a mentor, a friend, a family member, or a love interest so, you can start there.

The main thing to consider is that you really want this b-story character to represent the change to come and/or the new way of thinking. So, sometimes it's best if the B-Story character is someone who the protagonist would never have met or noticed in their act one world. And the reason for this is that If they were in your character’s act one life, then why wouldn’t they have changed before now?

An example of this is Peeta in The Hunger Games. Peeta has lived in District 12 his whole life, and although he did have a few encounters with Katniss in the past, it isn’t until they’re both representing District 12 as tributes that Peeta takes on a bigger role in her life.

You might be wondering, is it okay to have multiple B-Story characters?

And the answer is YES! As long as they’re both fulfilling the function of the B-Story character role. Otherwise, when it comes time to edit your draft, you’ll likely end up cutting one of them.

The fun and games beat is a multi-scene beat in which we see the protagonist really sinking in and adjusting to their new world. And they’re either succeeding or they’re failing.

Those are your only two options.

They’re either loving it or hating it. They’re either grateful that they made the decision to go on this adventure or they’re bummed, and missing their old way of life.

A lot of the writers I work with get confused by the name of this beat. They think because it’s called "fun and games" that it has to literally be just fun and games for their character with no conflict whatsoever. And that’s not true.

Every scene in your novel needs to have conflict in it otherwise it’s going to be boring. And conflict doesn't always mean bad stuff has to happen, or there needs to be a big explosion.

If your character wants something, but is presented with two equally good ways of getting it, and will miss out on something with either choice, that’s conflict. So, sometimes it’s about conflict in terms of what that character wants right now and what they’re expecting to happen.

One thing to note is that this section isn't always about the character experiencing fun and games-- it’s really about the reader experience them instead. What happens in this part of the story is the "promise of the premise." In other words, it's probably part of the reason why they were drawn to the story in the first place. And, if you think about it, reading about a character’s struggle is interesting and engaging for readers--it's fun and games.

Something important you’ll want to decide here is whether this section takes your protagonist on an upward path closer to success at the midpoint, or if it’s more of a downward path that brings them closer toward failure at the midpoint.

We’ll talk more about the shape of act two over the course of the next few beats, but this is one of the key decisions you’ll need to make because whatever path you choose here, upward or downward, it’s going to affect the next beat as well as the rest of act two, too.

Now, you might be wondering, how the heck am I going to fill up twelve scenes!?

As the plot throws continual challenges in their way, your protagonist will keep failing because of their internal obstacle.

Let's look at the difference between a false victory and a false defeat first.

A false victory means that the protagonist has been succeeding in the new world so far, and here at the midpoint, they have a false victory.

They’ve seemingly won or achieved something significant, maybe everything they’ve been wanting, everything seems to be working out according to plan. But since they haven’t learned the theme of the story yet, it’s a false victory because their inner obstacle is still there.

A false defeat is the opposite so, if they’ve been floundering around in the new world so far, this would culminate in a low moment for your protagonist.

Maybe they seem really far away from achieving their goal. Or maybe they achieve it and it doesn't feel good at all. Maybe they even feel like giving up.

No matter how you write it, it’s a false victory or a false defeat because the story isn’t over yet. They still have to learn the lesson of the story.

The reason why we need either a false victory or a false defeat here is because we want to up the stakes in the story. That’s the second function of the midpoint.

So, the fun and games section was all about chasing what they want--or that external thing they want to accomplish or get. Now the midpoint ups the stakes and the protagonist realizes time is running out or they can’t mess around anymore. It’s time to get serious.

And the cool thing is that we can look to our genre for guidance! For example:

The third function of the midpoint is to cross the A and B stories. So, the A story is your external plot. The B story is the inner character journey, represented by that B-story character or subplot.

Because of this, the midpoint often changes the direction that the story is headed in. This is also where the protagonist starts to shift from chasing their wants to letting go of the thing they want in order to figure out what they need.

This is not going to happen in one scene, I’m just saying this shift usually starts to happen here. Regardless, they realize things haven’t been working so they must change tactics or plans again. It’s now even harder for them to go back to their act one world, and the person they were before.

So, to recap the midpoint beat, there are three main functions to consider. First, we want the fun and games beat to culminate in a false victory or a false defeat that raises the stakes. Second, we want the stakes to be raised so that the protagonist cannot possibly go back to their act one world (and who they used to be). And third, we want the A and B stories to cross here so that the protagonist can start shifting away from chasing the thing they want, and move one step closer to chasing what they ultimately need. And that's beat number nine, the midpoint.

And that’s it for the first half of the beats that make up the middle section of a story.  If you're ready to move onto the second half of act two, click here to check out the next handful of beats!

If this structure resonates with you, there are a few fantastic books you can check out that go into way more detail than I can go here.

And if this plotting method doesn’t resonate with you—that’s okay too! There’s no “right” way to plot out a novel. What's important is finding a method that works for you so that you can finish your draft and get your story out and into the world. 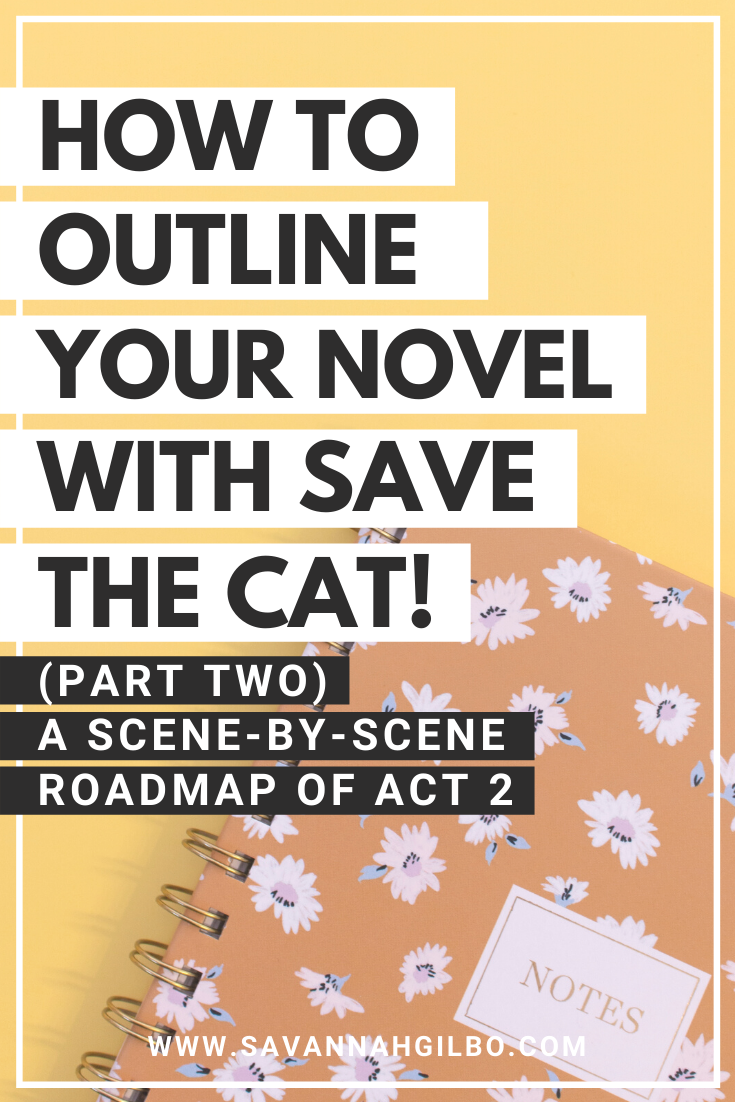