How to Outline a Romance Novel 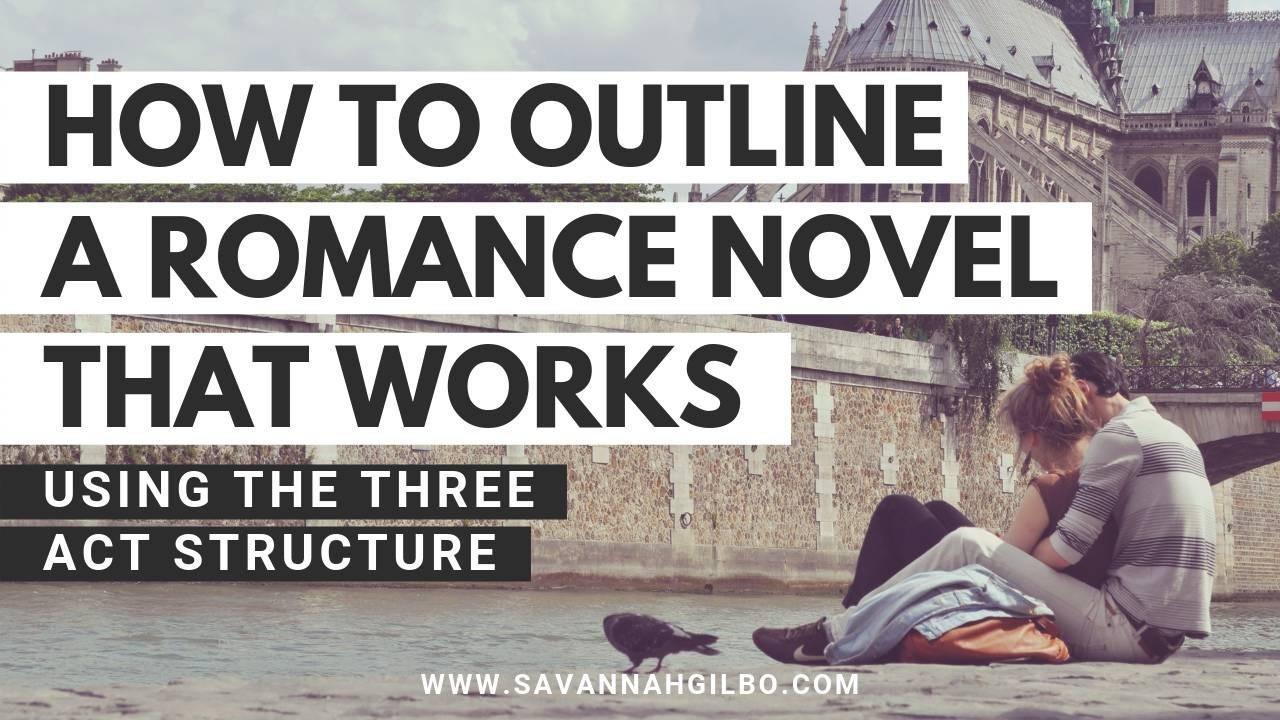 In today’s post, I’m going to show you how to write a well-structured romance novel using the Three Act Structure.

The first thing you’ll want to do when planning any novel is to decide upon a target word count. The average length of a romance novel is 80,000 words, so I’ll be using that for my example. Once you know your target word count, you can divide your novel into sections using the Three Act Structure.

The Three Act Structure is a plot template that splits a story into three parts. Typically, the sections break out like this:

Now let’s take a look at the purpose of each act, as well as the key story moments that need to happen within each act.

The purpose of Act 1 is to introduce your two main characters and to bring them together. It’s also where you’ll want to establish your character’s external goals and the main conflict that keeps them from their goals (and their relationship with each other). By the end of this section, your reader should be wondering, “will these two characters get together or not?” Act 1 includes these key story moments:

The Hook is your first opportunity to grab your reader’s attention and draw them into your story. Ideally this is where you’ll show your protagonist (or protagonists if you have more than one) in his or her everyday life and give the reader a glimpse of your character’s internal, emotional “issue” that’s standing in the way of him or her finding and accepting true love or a great relationship.

The Inciting Incident in a love story is ALWAYS when the two main characters meet, or when they first appear on the page together. Sometimes this meeting occurs because external forces push them together (such as friends or family encouraging the protagonist to find a partner), or because some life event puts the protagonist near a potential mate (such as a job, shared vacation, or disastrous weather event). Sometimes there’s an immediate attraction, and other times the characters instantly dislike each other for one reason or another and essentially “reject” the relationship. This meeting gives rise to your character’s object of desire, which is usually to pursue a romantic relationship or to run away from one.

If your characters aren’t “stuck” together yet, the First Plot Point is usually an event or situation that sticks your characters together like glue. This could be because they’re in business together, they’re getting married out of convenience (like for a green card), they’re stranded in a snowstorm, they’re in a contest or battle together, etc. Whatever it is, there’s usually some kind of new development that raises the stakes and clearly defines each character’s goals. This is also where you can introduce an external goal that might be more specific to the sub-genre you’re writing in.

The purpose of Act 2 is to let your two main characters start to fall in love, but not all the way—until they overcome their fear or false belief (or the lesson of the story). They need to start to reconcile their differing wants and needs. By the end of this section, something happens and the characters (temporarily) separated. The key story moments of Act 2 are:

A glimpse at the opposition, or what your character’s face in terms of both inner conflict and outer conflict. Usually, by this point, the attraction is starting to build, and the characters may even start to think, “maybe love or a relationship wouldn’t be so bad…” Sometimes this is where your characters share their first kiss or first intimate moment together. For example, seeing the other character carry out a good deed, a fun moment, sharing personal truths or secrets, having to trust one another to accomplish some goal, etc.

Another new development raises the stakes (again). The Midpoint can either manifest as a “false-high” or a “false-low.” A “false-high” is when it appears that your two characters are committed and ready to live their lives “happily ever after” (HEA). This could manifest in your story as the moment the couple finally sleeps together, or a moment where they open up to each other like never before. It could also be a moment where they finally admit to themselves that what they’re feeling might be true love. A “false-low” is when it appears that there’s no way that your two characters will ever commit—especially to each other. This could manifest as one person admitting their feelings and the other person saying they could never love them, or it could be a moment where they reaffirm their dedication to their individual goals that are a big source of the conflict in their relationship. Whatever the situation is—this moment usually causes your protagonist to look inside herself and consider what it is that she really, really wants (or needs).

Another glimpse at the opposition. Usually, this is more heavily weighted toward the character’s inner conflict—or what they need to overcome internally (fear or false belief) in order to receive true love. At the Second Pinch Point, the intimacy between your two characters might still seem to be growing, but your protagonist’s fear or false belief starts creeping back to the surface. For example, does your heroine think all men cheat? Does your hero think he needs to choose between love and career? Does your heroine think she’s unworthy of love because her dad left her and her mom? Whatever it is, this fear or false belief is nagging at your protagonist for one reason or another.

A new development that raises the stakes (again) to their all-time highest point. This is where the absolute worst thing that can happen to the heroine (or hero) happens; the betrayal that she always feared would happen happens. The trust given to her partner is broken. This is when your protagonist’s fear or false belief takes over, and they start to see their worries manifest in reality. Usually, it sounds like this, “I knew better than to think I deserve love/believe in love/want love because when I let my guard down, XYZ happens.” Because of this, there’s usually a breakup or a separation that makes it seem like a relationship is definitely off the table. Usually, the romantic relationship’s importance jeopardizes one or both character’s chance to succeed as his or her external goal. Whatever happens, you want to show that both of your characters have a choice at this moment—they can choose love or choose fear—and one or both of them choose fear. Sometimes one will declare themselves, but the other doesn’t reciprocate for some reason related to their internal flaw or wound.

The purpose of Act 3 is to bring your characters back together and deliver the “happily ever after” (HEA) ending that your readers are longing for. In other words, this section provides the answer to the question raised in Act 1. The key story moments of Act 3 are:

At the Crisis moment, one or both of your characters will have to decide if it’s worth working through their inner conflict in order to accept true love, or if they’ll succumb to their internal fear or false belief and close themselves off to a relationship. Usually, this is where the protagonist realizes what he or she must do to fix not only the external story problems but more importantly, their internal problems as well. It’s the moment where he or she figures out the solution to their big problem and learns the theme or life lesson of the story.

Almost always, the Climax of a love story will show the two characters getting back together. Usually, there’s some romantic gesture or a scene where one of the characters proves their love for the other. It’s the answer to the question asked in the Inciting Incident, “will these two characters get together or not?”

The Resolution shows the reader a glimpse of what life is like now that one or both of your characters has overcome their false belief and opened themselves up to true love. It’s the “happily ever after” (or the HEA) ending that readers have been waiting for since page one.

So, there you have it—the “broad strokes” of a romance novel. There’s much more to it, but this should give you a pretty good framework to build your story around! 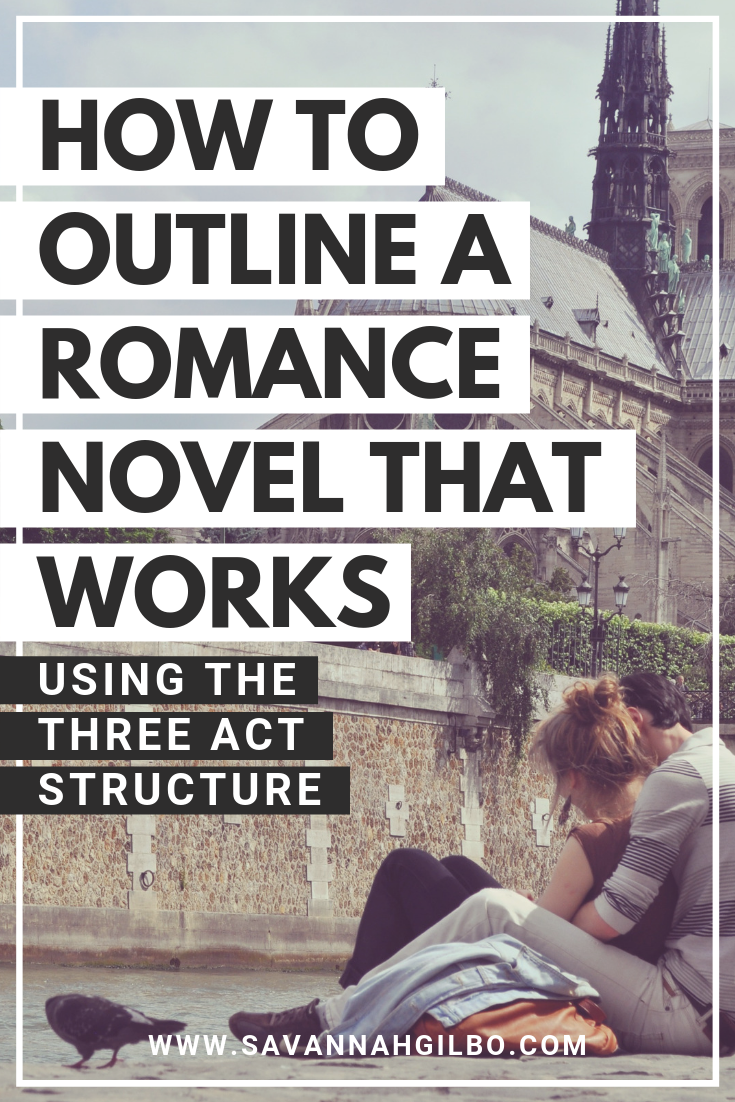 👉 Let's discuss in the comments: Are you writing a romance novel? Do you plan or outline your story before you write? What plot structure templates do you use?