🎉 DOORS ARE OPEN! Click here to enroll in the Notes to Novel course! →

The Inciting Incident: How to Get Your Story Into Motion 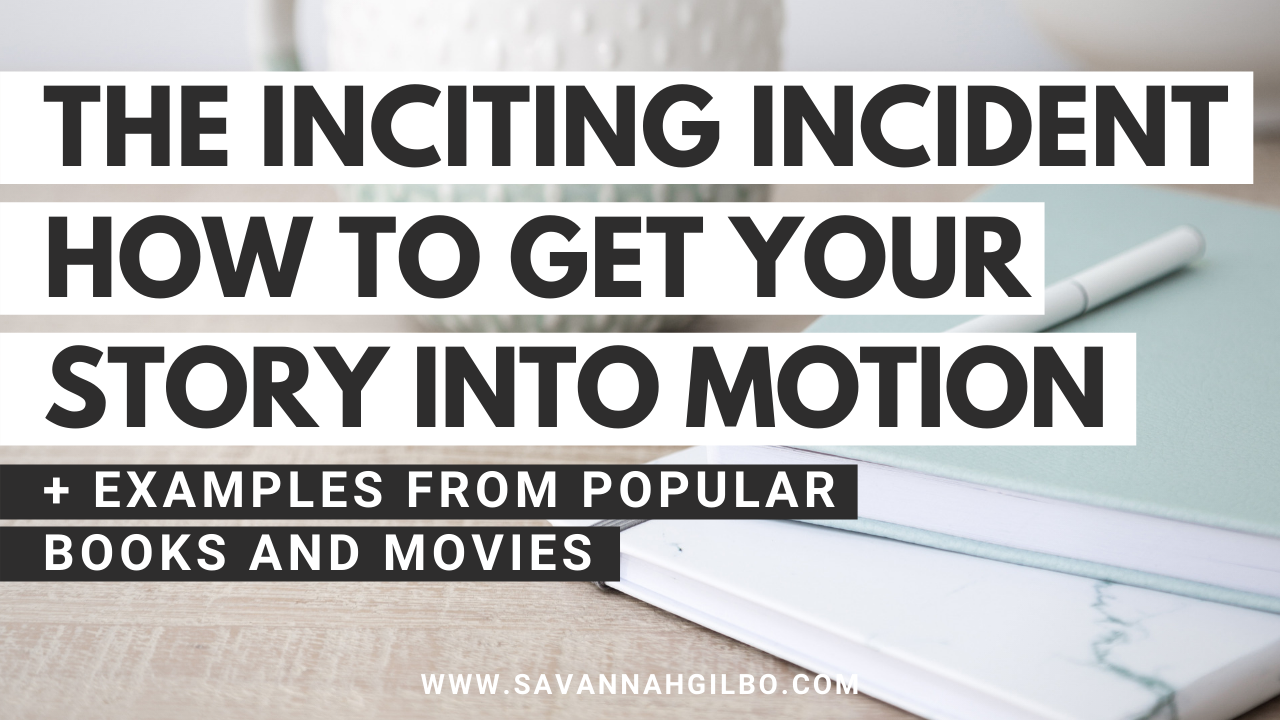 In the last post on story structure, we went over the first story milestone – the Hook. As a reminder, the Hook is your first opportunity to catch your reader’s attention and draw them into your story. But once you’ve hooked them, how do you keep their interest and convince them to keep turning the pages?

This moment is called the Inciting Incident and it’s the second story milestone in the First Act.

You might know it as the Call to Adventure (on the Hero’s Journey), or the Catalyst moment (in Save the Cat), but in today’s post, we’re going to refer to it as the Inciting Incident to keep things simple.

What is the Inciting Incident?

The Inciting Incident is some kind of event that occurs and upsets the balance of your protagonist’s life. It's usually something unexpected that makes it impossible for your protagonist to continue living their life the way they’ve always done.

It’s also what sets your story in motion and gives rise to your protagonist’s overarching story goal. So, from this moment on, your protagonist will be trying to achieve something specific that they think will bring happiness or success or validation or whatever they need in order to restore balance to their life.

We’ll talk more about examples later, but for now, imagine you’re writing a murder mystery and a dead body has been discovered. This is the inciting incident that throws life out of balance. So, in order to restore balance -- or to bring justice to this dead person and their family, the detective must find out whodunnit by following the clues and solving the case.

Using our example of the murder mystery, the inciting incident asks “whodunnit” and the detective answers this question in the climax when they unveil the identity of the murderer and bring him or her to justice.

In this way, the inciting incident is also what puts the protagonist and the antagonist at odds with each other, too. The detective wants to solve the case while the antagonist wants their identity to remain hidden. So, in this way, it’s the moment that ignites the central conflict of your story, too.

And because of all that, you can probably see just how important it is to nail the inciting incident of your story, right? But luckily, we can break it down piece by piece so it’s less overwhelming and so that you have all the tools needed to write a great inciting incident.

So, with that in mind, let’s first talk about where the inciting incident usually occurs in your global story.

Where does the Inciting Incident occur in the story?

The inciting incident of your global story should occur somewhere around the 12% mark or about halfway through the first act of your story.

And this placement is important because it will allow you to properly introduce your characters so that readers can sympathize with and latch onto them before the global inciting incident arrives and completely changes things for better or worse.

The Three Types of Inciting Incidents

The coincidental Inciting Incident is when something unexpected, or accidental happens. It’s a random event that occurs and throws the protagonist’s life out of balance.

For example, in Harry Potter & the Sorcerer’s Stone, the global Inciting Incident is when Harry finds out he’s a wizard and that he’s been accepted into Hogwarts School of Witchcraft and Wizardry. It’s a coincidental Inciting Incident because it’s completely unexpected and changes how he views himself, what he knows about his parent’s death, and alters his path forward in life.

The ambiguous Inciting Incident could be either causal or coincidental, but the reader doesn’t know for sure until the end of the story.

For example, in Fight Club, the narrator comes home to find that his apartment has been blown up. It’s an ambiguous Inciting Incident because we don’t know whether the apartment was blown up by accident (coincidental) or if someone caused the explosion (causal) until the end of the movie.

So, okay, now let’s talk about how the global inciting incident manifests across the different genres. Before I dive into the specifics, I want to remind you that I have a whole blog post and podcast episode on genre that you can check out here.

The Inciting Incident is Genre-Specific

If you've seen any of these movies or read any of these books, you can probably see why these moments are the catalyst for change in the protagonist's life, right?

And can you see how each of these examples accomplishes the same thing even though the specifics of the scene looks different across genres?

Let's dive into a few of these examples a little deeper...

Example #1: In The Hunger Games, Katniss’ younger sister, Prim, is chosen as the female participant in this year’s Hunger Games.

This works because if nobody from Katniss’ family was chosen for the Hunger Games, life would have continued on normally. When Prim is chosen during the reaping, it forces Katniss into action. She knows Prim will never survive the Hunger Games and decides to volunteer as tribute. The story is now set in motion, and Katniss’s life will never be the same. At the end of the scene, the reader is wondering, “What will the Hunger Games be like? Will Katniss survive? How will she prepare for this?”

Example #2: In Harry Potter & the Sorcerer’s Stone, Harry finds out that he’s a wizard and that he’s been accepted into Hogwarts School of Witchcraft and Wizardry. He also learns that his parents were murdered (and not killed in a car crash).

This works because up until this point, Harry’s uncle has been preventing him from receiving his Hogwarts acceptance letter. Harry knows something is up, but it’s not until Hagrid shows up and tells Harry he’s been accepted into Hogwarts that everything changes. Within this scene, Hagrid also tells Harry the truth about how his parents were murdered which changes how Harry views himself and his past. At the end of the scene, the reader is asking, “Will Harry go to Hogwarts? What will a magical school be like? Will Harry fit in there? Who is Voldemort? Why has Harry been kept in the dark about his past for eleven years?”

It’s important to be aware of the typical Inciting Incidents of your genre because if you don’t deliver the type of Inciting Incident that readers are expecting, they will likely put your book to the side and pick up something else to read. Or, if they read it, they’ll likely walk away from your book feeling unsatisfied without being able to explain why. Not ideal, right?

So, to recap, after you've hooked the reader in your first page or opening paragraph, it's time to set up your protagonist's ordinary world and get the reader to connect with him or her. Then, you need to deliver the Inciting Incident of your global story so that readers are pulled even farther into your story and are even more curious about what's going to happen next.

To do this in the most effective way possible, make sure that:

And as one more quick bonus tip, guess what? 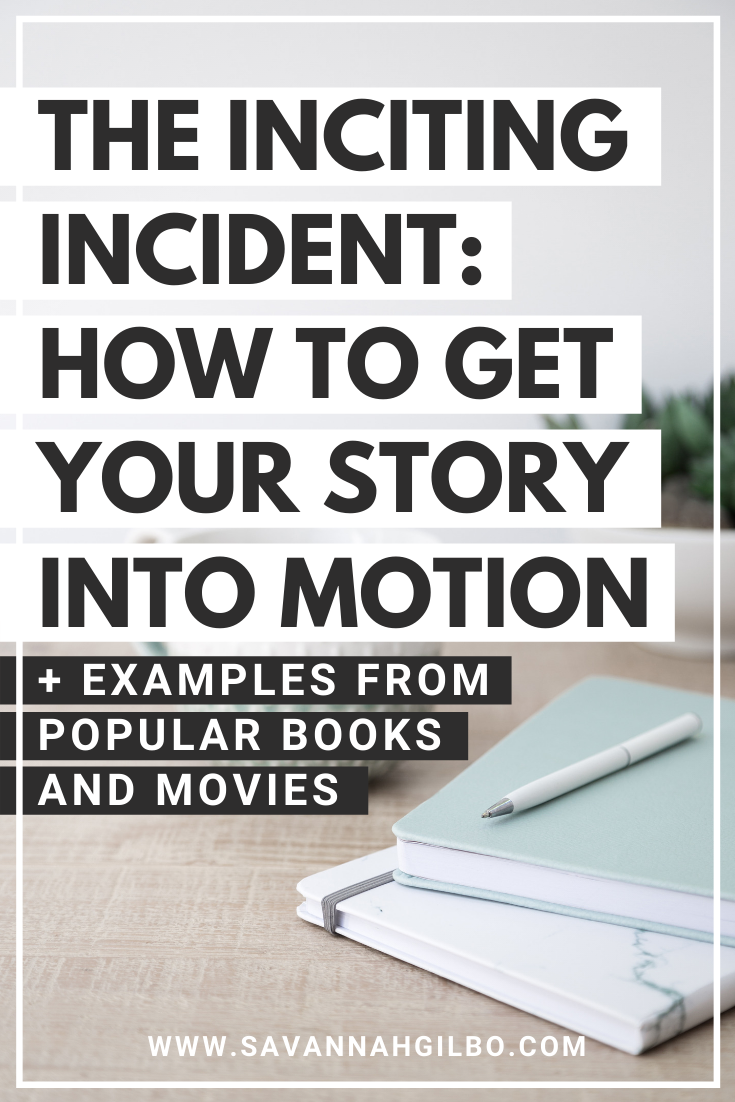 👉 Let's discuss in the comments: Can you pinpoint the global Inciting Incident of your favorite book or movie? Is it causal, coincidental, or ambiguous? In your own writing, what’s your process for coming up with an Inciting Incident for your story? 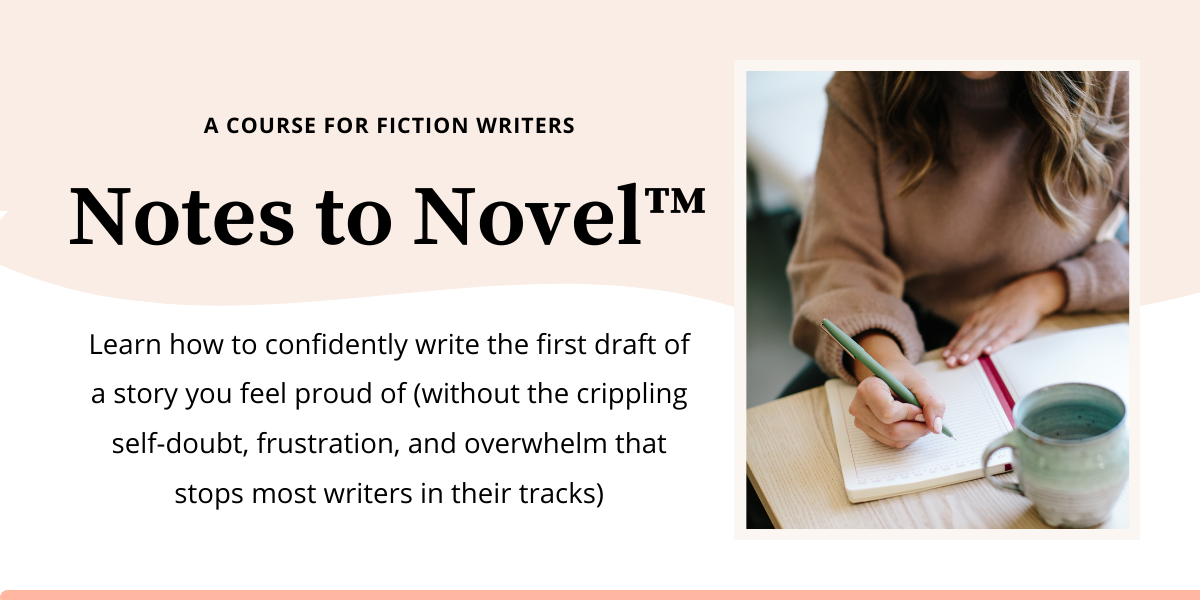 Doors are officially OPEN until October 28th at midnight PST!