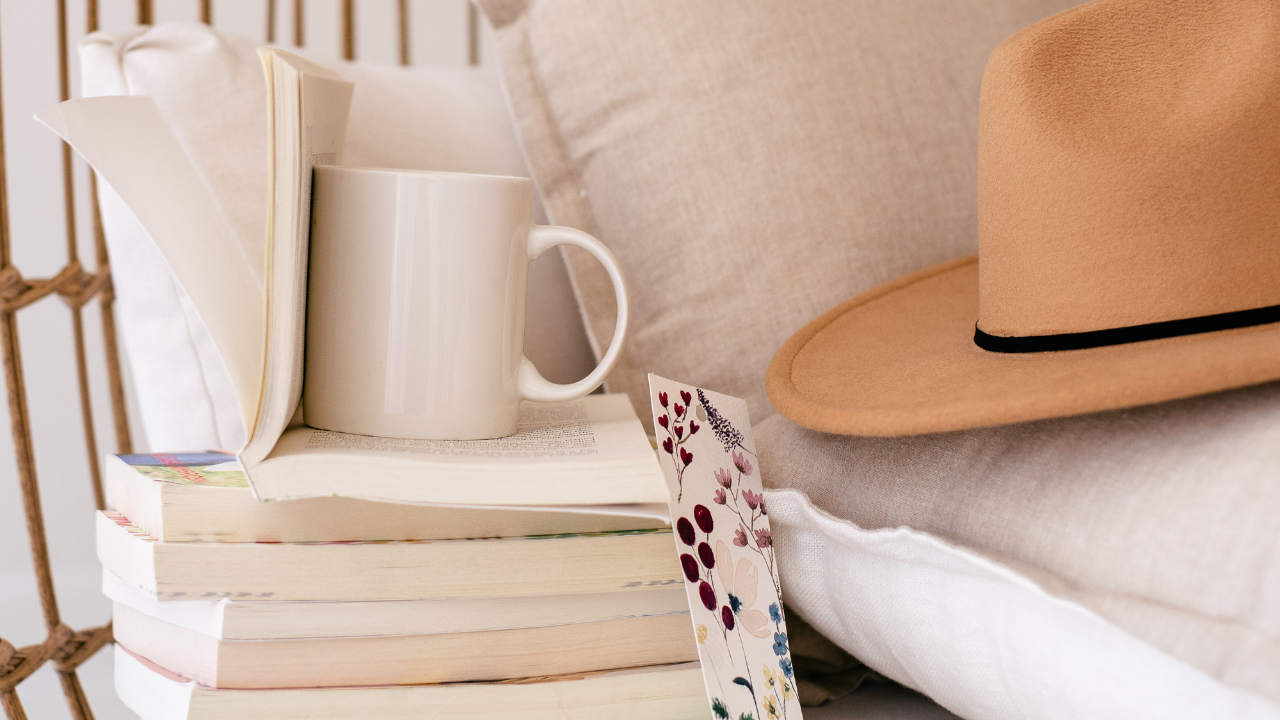 Do you ever have trouble making each of your characters unique?

Have you ever wondered how to write a large cast of characters in a way where each character stands out from the others?

But first, let's talk about what character hooks are so that we're on the same page.

What are character hooks?

Character hooks are things like personality traits, physical features, or associations that define a character and distinguish them from everyone else.

A hook is something that readers can hang their memory on -- especially in the early stages of a story -- that helps them remember who is who in the story.

10 Types of Character Hooks to Use in Your Story

1. Give your character an accent or a specific way of talking.

For example, consider the way Hagrid talks versus someone like Professor McGonagall. Hagrid has a kind of a backcountry accent that reflects his upbringing and where he came from. Professor McGonagall has more of a clipped and direct way of speaking. She also speaks very properly and seems to be highly educated, right?

These are just two examples of how an accent or certain ways of speaking can really help your characters feel unique and different from each other.

2. Give your character an identifiable physical feature.

The second type of hook you can give your character is an identifiable physical feature. Instead of describing every single aspect of a character’s appearance, choose one or two physical traits that are especially unique to focus on.

For example, almost everyone in the wizarding world can recognize Harry Potter by his lightning-bolt shaped scar, right? They would never mistake someone like Neville Longbottom for Harry because Neville doesn’t have Harry’s famous scar. Harry’s scar is his unique and identifiable feature. You can also think about someone like Dolores Umbridge who is almost always wearing pink and is described as looking kind of like a toad.

So, hopefully, you can see how one or two unique physical features can be much more impactful than describing every little detail. Plus, as a reader, isn't it kind of fun to be able to fill in the gaps of a character’s appearance with our imaginations?

3. Give your character their own body language or mannerisms.

The third type of hook you can give your character has to do with their body language and mannerisms. A character’s physical appearance is more than just how he or she looks. It’s also about the way he or she moves and interacts with the world. And just like in real life, a person’s body language can speak volumes about what they think and feel.

For example, take someone like Neville Longbottom who is rather forgetful and clumsy. His actions show how little self-confidence he has, right? Compare that to someone like Draco Malfoy who has a permanent sneer on his face that clearly communicates how everyone else is beneath him.

4. Give your character a human or an animal counterpart.

For example, Crookshanks is Hermione’s animal counterpart just like Mrs. Norris is FIlch’s. Neville has his toad, Trevor, and Harry has his owl, Hedwig. As far as human counterparts go, Fred and George Weasley have each other. They’re always together and they share similar personalities and interests. Same with Padma and Parvati Patil. Even though they’re in different houses, they’re usually seen together.

So, consider giving your character a human or animal counterpart to help set him or her apart from the rest of your characters. This is another great way to give insight into your character’s personality or preferences, too.

5. Give your character a unique personality.

For example, consider Gilderoy Lockhart who thinks that he’s the most handsome, gifted, and wonderful wizard to ever live, right? You wouldn’t mistake him for someone like Professor Lupin because Lupin is more humble and tends to want to stay out of the spotlight. Not only that, but Professor Lockhart plays at bravery while Professor Lupin is actually brave.

6. Give your character strengths and weaknesses.

For example, Harry Potter is both brave and loyal. He’s also stubborn and sometimes reckless -- which has, more than once, put his life and the life of his friends in danger. I’d say he has a pretty good mix of strengths and weaknesses. You can also consider someone like Hagrid who has a lot of love for animals, right? That’s a strength, but it can also be a weakness. Hagrid loves animals so much that he doesn’t always use the best judgment when it comes to making decisions about said animals.

So, don’t be afraid to give your character both strengths and weaknesses. Not only will this help your characters seem more relatable, but it can also help you see areas for potential conflict, contradiction, and growth, too.

7. Give your character a specific role in the story.

The seventh type of hook you can give your character is a specific role in the story. Roles can be anything from a job, to a place in the family hierarchy, to an archetypical role like that of a mentor or a sidekick.

For example, Dumbledore is clearly Harry’s mentor. Not only is he in charge of the whole school, but he spends time with Harry offering him insight, guidance, and advice throughout the story. Sirius Black is almost like a father figure to Harry whereas someone like Mrs. Weasley treats him like a mother would.

These specific roles help readers understand characters more easily from the moment they step onto the page. But roles can help define characters outside of their relationship to the protagonist, too.

For example, consider someone like Stan Shunpike who is very recognizable and memorable as the conductor of the Knight Bus. You’re probably not going to confuse Stan Shunpike with someone like Ludo Bagman, right? That's because they each have different roles or jobs within the story.

8. Give your character a group or family connection.

The eighth type of hook you can give your character is a connection to some kind of group or family. This is similar to giving your character a counterpart, but a little different because we’re talking about a larger group of people.

So, for example, think about the Weasley family. Every single member of the Weasley family has bright red hair. They also wear hand me down clothes and have used quality books, quills, and brooms. Compare them to the Malfoy family who is very well off financially and uses only the best brooms, books, and quills. Not only that, but they’re described as being pale-haired, pale-skinned, and as having sharp features.

This could also work for groups such as the Death Eaters or the Order of the Phoenix. By allowing readers to associate characters with "bad" or "good" groups, it's easier for them to understand a character’s place within the story.

9. Give your characters a dominant emotional state.

For example, when Hermione is stressed or under pressure, her logical mind takes over. She turns to books and gathers as much information as possible in order to solve her problems. Compare that to someone like Draco Malfoy who is almost always judgemental and snarky. He uses his pureblood status, his family’s money, or leans on the influence of his father in order to solve his problems.

So, consider how your character would react in times of stress or when under pressure. Do they freak out? Turn to books? Confide in their friends? In real life, no two people react the same under pressure and it should be the same for the characters in your story, too.

10. Give your characters a part to play in concealing a mystery.

The tenth type of hook you can give your character is a role to play in concealing some kind of mystery. In other words, use them as a type of red herring to mislead or misdirect readers.

For example, someone like Peter Pettigrew disguised himself as a rat for over twelve years in order to hide from the rest of the world. This concealment of the truth played a huge role in book three of the series. And whenever readers remember Peter Pettigrew, they always associate him with this mystery.

The same can be said about Professor Snape, right? Throughout the whole series, readers were on the fence wondering whether he was “good” or “bad.” I can’t imagine talking about the Harry Potter series without mentioning Professor Snape and the big secret he kept hidden until the very end. He’s the master of ambiguity and concealment.

Tips for incorporating character hooks into your story:

Now, you might be wondering... What am I actually supposed to do with these hooks when it comes time to write?

Here are my top three tips for incorporating character hooks into your story:

Diversity is real. We live and breathe it on a daily basis. So, don’t be afraid to utilize the rainbow of humanity fully when it comes to developing your characters.

It doesn't matter if you're writing a fantasy book with wizards, merpeople, giants, or grindylows. You can use any of these ten character hooks in whatever kind of story you're writing.

Make sure to mention your character hooks often so that readers remember them, but not so often that it becomes annoying.

This is something beta readers or critique partners or even your editors can help you with once you have a finished draft. They can read through your draft and tell you whether you've included these character hooks too often or not enough.

Tip #3: Make sure your character hooks add to the story.

Make sure your hooks and their characters add something relevant to the overall story. Don't give your character a hook just for the sake of checking a box.

This is particularly why I chose to use the Harry Potter series as an example today because J.K. Rowling didn’t include anything in her story by accident. Every unique detail or character hook had an impact on the overall story -- some of them more than others.

So, as you’re developing hooks for your characters, consider how these details will affect everything else, and how they'll play out in the story. That way, when you’re done, your story will feel like a satisfying and cohesive whole instead of just a bunch of random things thrown together. 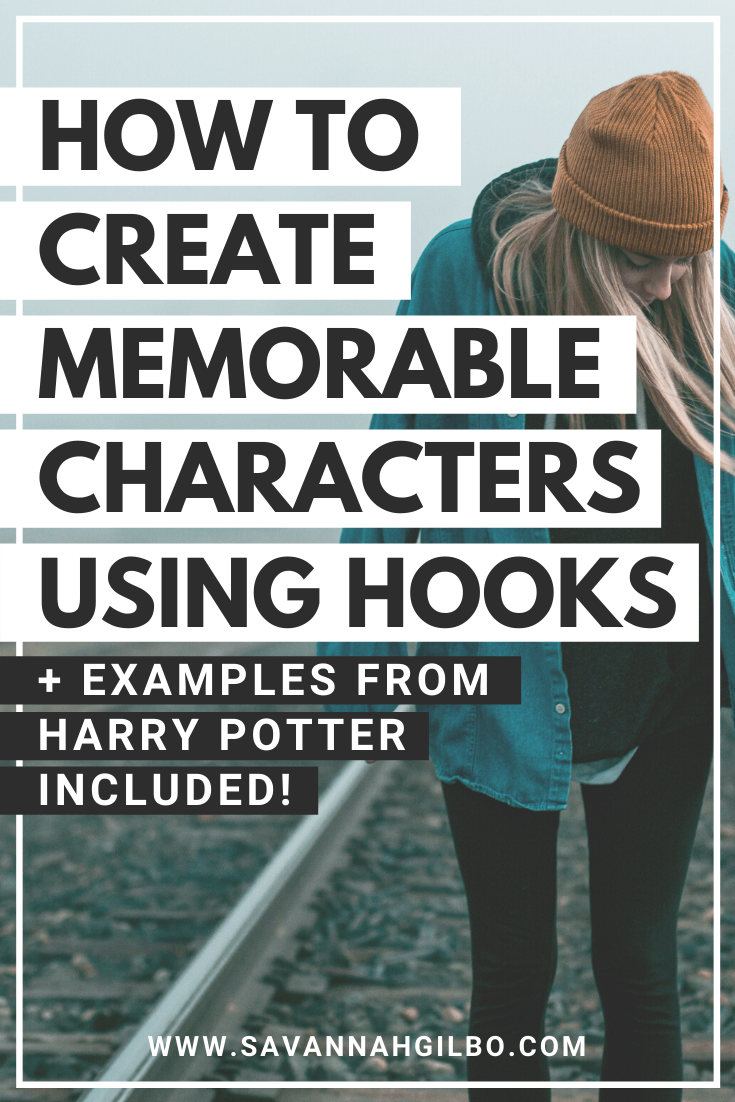 Hopefully, you can see how these ten types of hooks can help you create unique and memorable characters. I suggest using a mixture of these types of hooks to add a sense of variety and depth to your story.

As a bonus exercise, grab one of your favorite books and see if you can identify any of these hooks for the prominent characters. How many different types did you find?

Let me know in the comments: Do you use character hooks in your stories? Are any of these types of hooks your favorite?