3 Reasons You Should Write in Scenes vs. Chapters 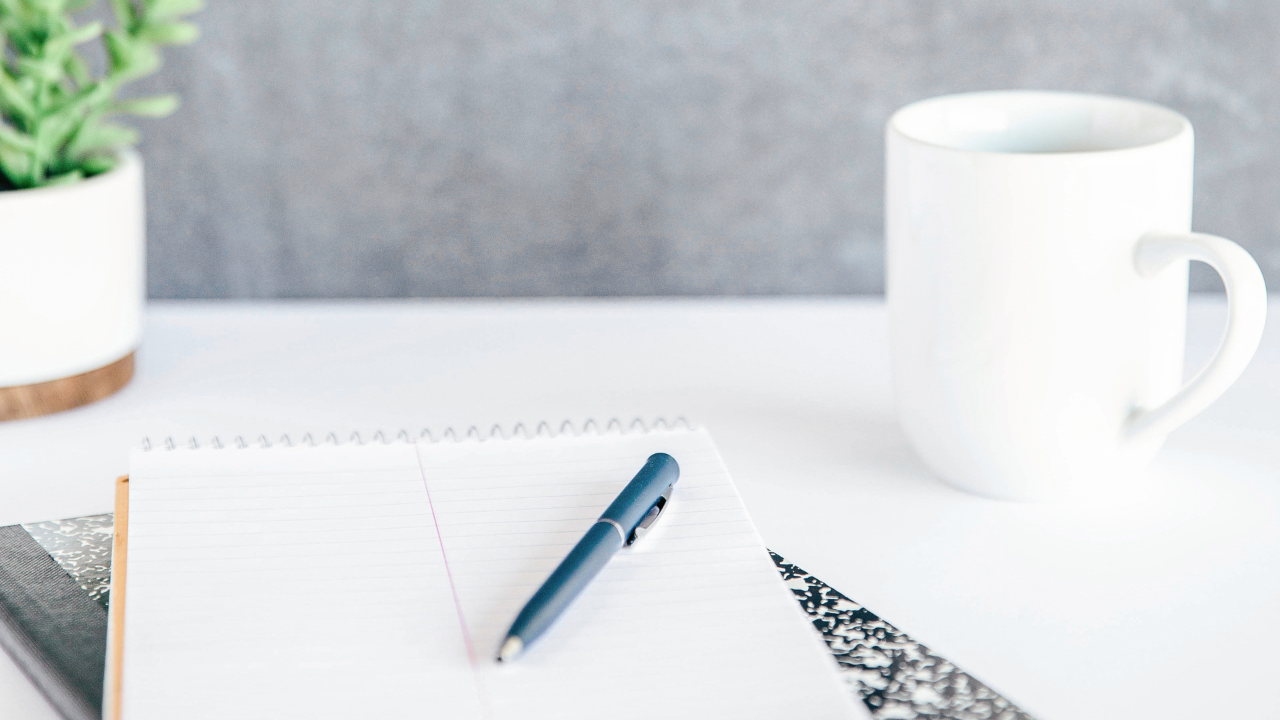 What are the differences between scenes and chapters?
Should each scene be its own chapter? Or can a chapter have multiple scenes?
These are questions I get from writers all the time. So, if you’ve ever felt confused over scenes versus chapters, you’re not alone!
In today’s post, I’m going to walk you through three reasons why you should write your draft in scenes instead of chapters. But first, let’s talk about the difference between a scene and a chapter.

What’s the difference between a scene and a chapter?

Scenes and chapters are different.

And they each serve a different purpose in your story.

Scenes are mini-stories that link together to create your global story. They need to have their own beginning, middle, and end as well as a clear arc of change.

Chapters are arbitrary divisions within a story that mainly exist to control the reader’s experience. Unlike scenes, chapters have nothing to do with story structure.

Sometimes a single scene can make up one chapter. And other times, a group of related scenes work together to make a similar point, or to set up a pivotal moment within a chapter.
Both scenes and chapters play a role in your story’s pacing. But chapters are much more obvious to the reader, and therefore have more control over how the reader experiences a story.
For example, a novel with short chapters is going to have a much different feel, or a quicker pace, to it than a novel with longer chapters.
So, now that we’re clear on the difference between scenes and chapters, let’s talk about the three reasons why you should write and edit your draft in scenes, not chapters.

If you like planning out your scene count before you start writing, then using scenes instead of chapters will make this process A LOT easier.

Every story has a beginning, middle, and end regardless of how many acts you break the story down into. In general, the beginning represents 25% of the story, the middle represents 50%, and the end represents the final 25%.

When you know your total word count, say 80,000-words for this example, you can break that down into beginning, middle, and end as well.

Then, you can figure out how many scenes (approximately) will go in each section. In general, I recommend keeping your scenes between 1,000 and 2,000 words so, we’ll use 1,500 words scenes for this example.

That means your beginning would have about 13 scenes, the middle would have 26 scenes, and the end would have 13 scenes. You can round up or down from there.

Personally, I love breaking down my story this way before I start writing a single word. I like knowing roughly how many scenes I have to work with both in total and in each act -- that way it’s super clear to me if my story is going off track at any point.

For example, say that I've planned the beginning of my story should have about 12 scenes. If I'm already on scene number 18, with a long way to go in the beginning of my story, I know that something is wrong. Either this story is going to be a lot longer than I expected, or I’ve overwritten and the whole thing just needs tightening up. Usually, this means my plot points aren’t where they need to be, or I have scenes in the story that don’t really need to be there.

And again, there’s no exact rule here, I just know roughly when things need to happen from a structural standpoint to achieve the pace I want. If those scenes are falling too far outside the “norm” for my structure, I know there’s probably something wrong there. And they’re almost always is.

#2: It’s easier (and less stressful) to write the first draft.

I've worked with a lot of writers worry about ending chapters on cliffhangers or who agonize over writing perfect chapter opening. They worry about these things so much that they never end up making progress or finishing their drafts.

But, if you can get in the habit of writing in scenes versus chapters, there are many benefits.

First, you'll be able to write a more “complete” and well-fleshed out draft. That's because you'll be focused on creating scenes that work instead of ending chapters on cliffhangers.

Second, you won’t have to worry about how each chapter ends or how it transitions into the next chapter. You can just write each complete scene and move onto the next scene, and then the next scene until you’re finished.

Then, when it’s time to break your story into chapters, you can make sure the chapter breaks fall at the most exciting or interesting parts of a scene. That way the reader will feel that "tug" and want to keep reading.

Third, this also helps writers avoid writing "a bunch of things that happen" in each chapter to writing actual scenes that advance the story and the plot. And as I mentioned earlier, this will make a huge impact on the quality of your first draft.

A weak scene that falls in the middle of a "good" chapter is easy to skip during the editing stage—especially if everything surrounding that scene is relatively "good."

But when that scene is all by itself, in its own file, its flaws or weaknesses stand out. In other words, t's easier to see where a scene is falling short and how it isn’t really doing anything to serve the global story.

This is a great exercise for writers who have a lot of backstory or worldbuilding details in their scenes. All of that exposition or info-dumping really stands out when a scene is sitting in a file all by itself.

Plus, if you've used the above percentages to break out the total number of scenes you want your story to have, you can use this number during the editing process to help you trim out extra scenes or shape the sections of your story properly. 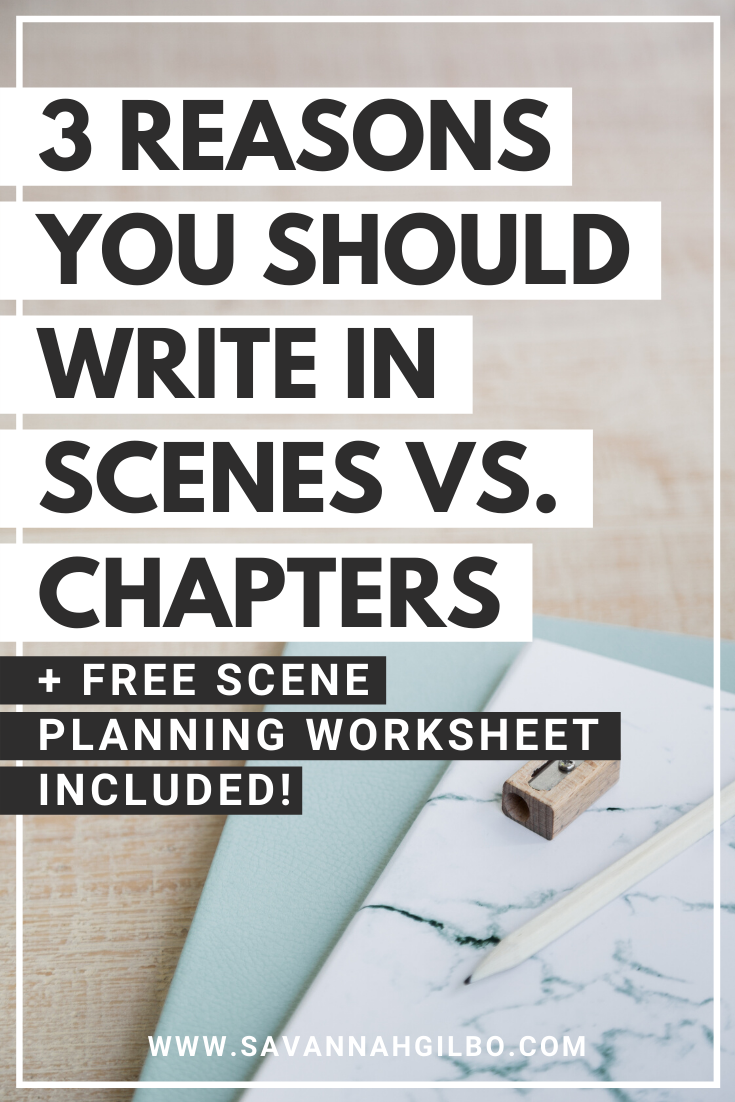 So, hopefully, you can see how writing in scenes instead of chapters can actually make the whole writing and editing process easier and a whole lot less stressful.

If you want to get a better understanding of scenes versus chapters, grab one of your favorite books and see if you can identify the number of scenes within a chapter. How many are there? Do some chapters start or end in the middle of a scene? If so, can you figure out why the author chose to do that?

👉 Let's discuss in the comments: Have you ever tried writing in scenes instead of chapters? Do you think you'll try it after reading this post?