How to Outline Your Novel with Save the Cat! 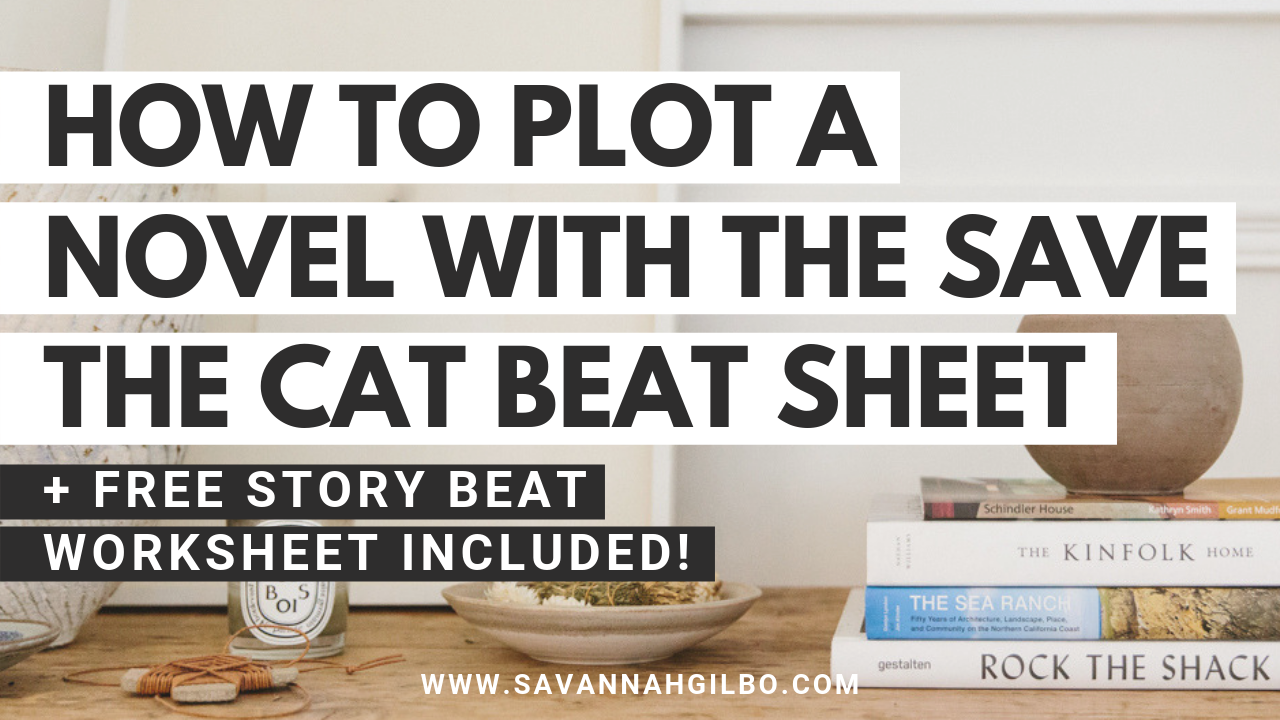 In today’s post, I’m going to show you how to use Blake Snyder’s Save the Cat! Beat Sheet to plot your novel.

If you aren’t familiar with Blake Snyder’s work, the Save the Cat! Beat Sheet is a popular story structure template that subdivides the beginning, middle, and end of a story into 15 “beats” or plot points. Each of these beats has a specific purpose and serves a particular function within your over-arching, global story.

Wait, wait, wait—are you really going to tell me to use a formula to write my book!? Doesn’t that defeat the purpose of creative writing?

I hear this a lot. But knowing how to structure your story does not make your story formulaic.

Think of story structure like an easy to follow blueprint that will help you write a story that works. Story structure helps you determine the order in which the events of your plot happen and, maybe even more importantly, the timing of when they should happen. Combine this with a character who needs to change—and does change—and you’ve got a story worth telling.

So, without further ado, let’s take a look at how to plot your novel with Blake Snyder’s Save the Cat! Beat Sheet. For my example, I’ll be using a plan of 80,000 words. Feel free to use whatever target word count you’re comfortable with as you work through each step.

The first thing we need to do is break down our total word count into three sections—or acts. In general, the:

So, that means we can break down our 80,000-target word count like this:

Step 2: Divide Each Act Into Scenes

Now that you know approximately how many words will make up each act, you can divide each act into a target number of scenes.

If you don’t know how many words per scene you write on average, use a target word count of 1,500 words per scene. I always recommend writing scenes between 1,000 and 2,000 words with the sweet spot being around 1,500 words. A 1,500-word scene is long enough to convey what’s happening and short enough to hold your reader’s attention and make them want to continue reading.

So, here’s how we can break down each act into a target number of scenes–the:

Based on the math, our target scene count is 56 scenes. You’ll probably notice I rounded up the number of scenes for each act—that’s totally okay! I’m showing you how to make a plan for your novel—it’s not something you have to follow to a tee.

Step 3: Figure Out Where the 15 Story Beats Go

Now that you know how many scenes go in each act, you can start to figure out where each of the 15 story beats will go. In his book, Save the Cat! The Last Book on Screenwriting You’ll Ever Need, Blake Snyder lays out where each beat should go:

For those of you who are “math-challenged,” (don’t worry—I am, too!) you can either take your total word count or your total number of scenes and multiply it by the percentage listed above.

Step 4: What Happens in Each Beat?

So, now that you have the approximate location of the beats figured out, you can start brainstorming what each beat will look like in your story. As you read through the description of each story beat below, write down any ideas you have on the downloadable worksheet or in your notebook.

1. Opening Image (0% to 1%) – A single scene beat that shows a “before” snapshot of the protagonist and the flawed world that he or she lives in.

2. Theme Stated (5%) – A single scene beat in which a statement is made by someone (other than the protagonist) that hints at what the protagonist will learn before the end of the story.

3. Setup (1% to 10%) – A multi-scene beat in which the reader gets to see what the protagonist’s life and the world are like–flaws and all. It’s also where important supporting characters and the protagonist’s initial goal (or the thing the protagonist thinks will fix his or her life) is introduced.

4. Catalyst (10%) – A single scene beat in which a life-changing event happens to the protagonist and catapults him or her into a new world or a new way of thinking. In other words, after this moment, there’s no going back to the “normal world” introduced in the setup.

5. Debate (10% to 20%) – A multi-scene beat where the protagonist debates what he or she will do next. Usually, there is some kind of question haunting them like, “should I do this?” or “should I do that?” The purpose of this beat is to show that the protagonist is reluctant to change for one reason or another.

6. Break Into Two (20%) – A single scene beat in which the protagonist decides to accept the call to adventure, leave their comfort zone, try something new, or to venture into a new world or way of thinking. It’s the bridge between the beginning (Act 1) and middle (Act 2) of the story.

7. B Story (22%) – A single scene beat that introduces a new character or characters who will ultimately serve to help the hero learn the theme (or lesson) of the story. This character could be a love interest, a nemesis, a mentor, a family member, a friend, etc.

8. Fun and Games (20% to 50%) – A multi-scene beat where the reader gets to see the protagonist either shinning or floundering in their new world. In other words, they are either loving their new world or hating it.

9. Midpoint (50%) – A single scene beat where the fun and games section either culminates in a “false victory” (if your protagonist has been succeeding thus far) or a “false defeat” (if your protagonist has been floundering thus far) or a. In romance novels, this could be a kiss (or more), a declaration of love, or a marriage proposal. In a mystery or thriller, this could be a game-changing plot twist or a sudden ticking clock that ups the ante. This could even be a celebration or the first big public outing where the protagonist officially declares themselves a part of their new world. Whatever happens during this beat, it should raise the stakes and push the protagonist toward making a real change before moving forward.

10. Bad Guys Close In (50% to 75%) – If the protagonist had a “false victory” at the Midpoint, this multi-scene beat would be a downward path where things get worse and worse for him or her. On the other hand, if the Midpoint was a “false defeat,” this section will be an upward path where things get better and better. Regardless of the path your protagonist takes during this multi-scene beat, his or her deep-rooted fear or false belief (their internal bad guys) and the antagonist (external bad guys) are closing in.

11. All is Lost (75%) – A single scene beat where something happens, that when combined with the threat of the bad guys closing in, pushes your protagonist to their lowest point.

12. Dark Night of the Soul (75% to 80%) – A multi-scene beat in which the protagonist takes time to process everything that’s happened so far. This is his or her darkest hour—the moment right before he or she figures out the solution to their big problem and learns the theme or life lesson of the story.

13. Break Into Three (80%) – A single scene beat where the protagonist realizes what he or she must do to fix not only the external story problems but more importantly, their internal problems as well.

14. Finale (80% to 99%) – A multi-scene beat where the protagonist proves they have learned the story’s theme and acts on the plan he or she made in the Break Into Three scene. A great finale has five parts:

As you can see in the visual scene map above, there are three scenes planned for the Gathering the Team section, the Executing the Plan section, and the High Tower Surprise section while there are only two scenes planned for the Dig Deep Down section and the Execution of the New Plan section. This isn’t set in stone—you can divide these thirteen scenes any way you like. However, this is my recommendation because ideally, you want the pacing of your story to ramp up towards the end. Fewer scenes equal a quicker pace.

15. Final Image (99% to 100%) – A single scene beat that shows the reader an “after” snapshot of your protagonist’s life and how much he or she has changed since the beginning of the story. 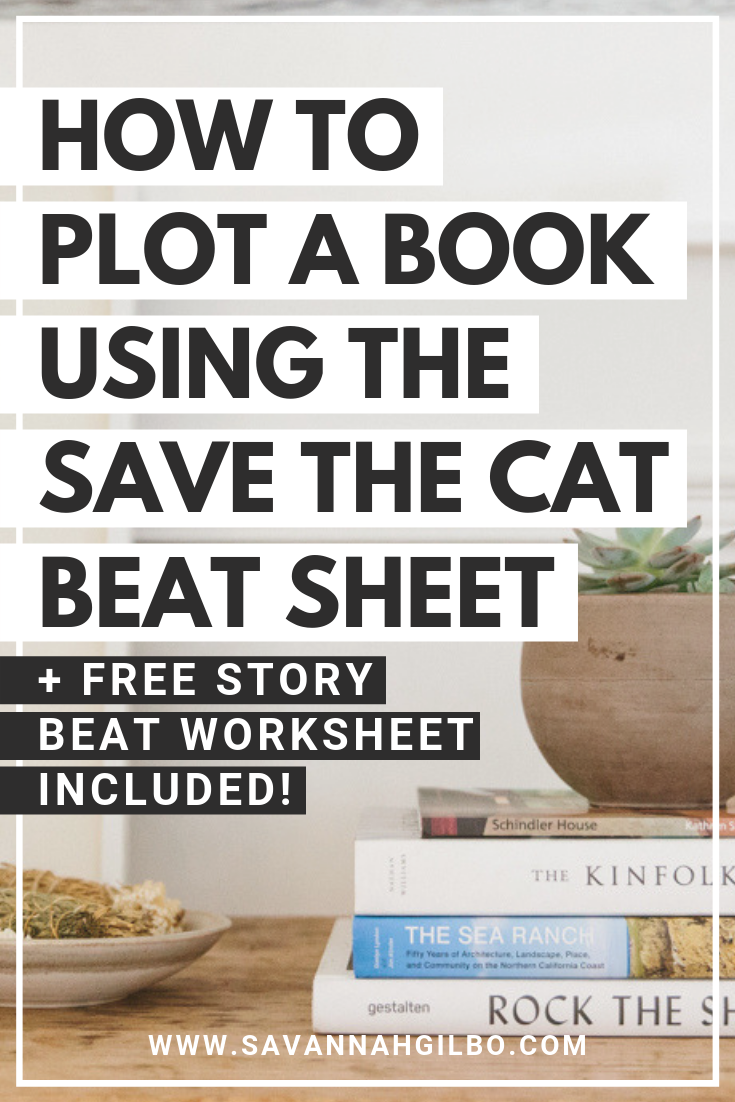 So, there you have it—my method for plotting a story using Blake Snyder’s Save the Cat! Beat Sheet!

And if this doesn’t resonate with you—that’s okay too! There’s no “right” way to plot out a novel. Check out this other article about How to Outline Your Novel with the Hero’s Journey

For self-study, I’d encourage you to map out these 15 beats for one of your favorite books or movies. Or for a book or movie that's most like the story you want to write. Doing this will help you see the Save the Cat! story beats in action, giving you a better understanding of how you can use this structure in your own stories!

👉 Let's discuss in the comments: What are your thoughts on the Save the Cat! Beat Sheet? Have you ever used these 15 beats to outline a novel? Did this article help you gain a better understanding of story structure?